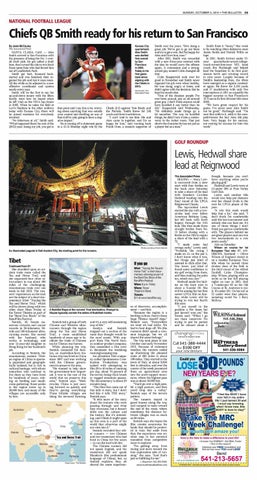 SANTA CLARA, Calif. — Alex Smith arrived in San Francisco with the pressure of being the No. 1 over-

all draft pick. He got called a draft bust, then turned the tide to win back

Smith over the years. &quot;He&#39;s doing a Smith finds it &quot;funny&quot; this week great job. We&#39;ve got to go out there to be watching 49ers defensive stars and try to get a win. But I&#39;m happy for Justin Smith and Patrick Willis on Alex and I love him, man.&quot; tape. After 2011, Smith was rewarded with a new three-year contract with the idea he would carry the offense

out of Candlestick Park. Smith got hurt, bounced back,

started and was benched, then re-

gained his job and lost it once more. All the while as he adjusted to a new offensive coordinator and system

year quarterback-turned-col legecoach-turned-first-year NFL head again. A concussion and a strong- coach Jim Harbaugh and helped armed guy named Colin changed all lead the franchise to its first postthat. season berth and winning record Colin Kaepernick took over for in nine years. Largely because of good inNovember and Smith never Smith&#39;s leadership then, the 49ers regained his job even when healthy. have emerged as a regular contendHe was stung, angry at times, and er again. He threw for 3,150 yards

nearly every year. Smith will be the first to say his

didn&#39;t agree with the decision. But he kept his mouth shut.

and 17 touchdowns with only five

ever been around, just an all-around

those same fans who had booed him

up-and-down tenure with the 49ers

hardly went how he hoped when he left Utah as the NFL&#39;s top choice

interceptions in 2011 as arguably the &quot;One of the classiest people I&#39;ve biggest surprise in San Francisco&#39;s

great guy. I don&#39;t think anyone could have handled it any better than he that point and I say this a lot, worry- Chiefs (2-2) against Tom Brady and did,&quot; Kaepernick said Wednesday. ing about anything that was outside the Patriots. Smith threw for 248 &quot;He definitely made things go a your control and dwelling on any of yards and three touchdowns. lot smoother. The way he handled &quot;I can&#39;t wait to see him. Me and things, he didn&#39;t turn it into a controthat stuff is only going to have a neg-

Levi&#39;s Stadium in the other uniform today with Kansas City, there will

be mixed emotions for everybody involved. &quot;No bitterness at all,&quot; Smith said. &quot;What happened there the end of the

He is coming off a statement game happy for him,&quot; said running back (2012) year, losing my job, you get to in a 41-14 Monday night win by the Frank Gore, a staunch supporter of

versy in the locker room. That just

&quot;We have great respect for his

petitiveness the fact Alex did play here. Very happy for his success,

shows the character he has not just as not rooting for success for him this a player but as a man.&quot; week.&quot;

started the day with a two-

don&#39;t think I&#39;m comfortable until the last tournament and

bogeys through the 11th

straight birdies from No. 13 before closing with a

think you get too comfortable with. The players behind me are great players and can win two tournaments in a row pretty easily.&quot;

a share of the lead with a 72. &quot;I An illuminated pagoda in Dali Ancient City, the starting point for the runners.

miles of th e c hallenging, mountainous route over one week in fall 2013. The run-

ners&#39; experiences on the trail are the subject of a short documentary titled &quot;Tracing the

Tea and Horse Trail,&quot; which will be shown along with two

Semick, 48, boasts nuSemick led a group of both merous victories and course Chinese and Western ultrarecords in 50-kilometer, 50- runners through the region mile and 100-kilometer ultra- along the Tea and Horse running events. She moved w ith h e r hu s b and, w h o

hundreds of years ago to facilitate the trade of Chinese

works in technology, and now 12-year-old daughter to tea for Tibetan war horses. Hong Kong for her husband&#39;s While planning the trip, Semick contacted Ed Jocejob. According to Semick, the mountainous eastern Tibet-

lyn, an Australian-born his-

torian who has lived in China an region of China is sparse- since 1997 and was working ly populated and geograph- with t h e C h i nese governically isolated, but is rich in ment topreserve the area. &quot;He wanted to help show cultural heritage, with ethnic minorities who continue to

live there as they have lived for hundreds of years, relying on herding and mushroom gathering. Some peaks in the region tower up to 20,000 feet, and many of the

villages are accessible only by foot.

the government how important it was to the rest of the world that we preserve this area,&quot; Semick says. &quot;Mod-

ern-day China is just moving forward so quickly and they&#39;re paving everything. These hillside villages are doing the terraced farming, Russia

strokes clear of the field in the third round of the Alfred my golf swing from there, Dunhill L i nks C hampionand then making the putts ship. Wilson, playing with an too, which was nice.&quot; invite as he lost full playing Hedwall made five bird- rights on tour in 2011, shot ies on the back nine to a 7-under-par 65 on the Old shoot a 5-under 68. She

will be aiming for her first

film creates awareness for lands that should be protect-

12 under were four players, day, while Lewis will be including world No. 1 Rory trying to win her fourth McIlroy. this year. &quot; I put myself in t h e position a few times but just haven&#39;t won yet,&quot; the Swede said. &quot;When I go

lived in China for five years

transition from competitive racer to explorer.

— to run the trail with her.

trying to just be patient and be relaxed about it

other step in her personal &quot;I&#39;m getting away from racing and more toward the

&quot;I feel the BEST I have ever felt in my entire life! I just turned 30 and I must say knowing what I know now, this BODY is here to stay!&quot;

Now is the time to make a difference in your life! I

true exploration side of running,&quot; she says. &quot;And that&#39;s

just so fulfilling for me.&quot;

ed in Asia. But aside from that, the experience was an-

world that otherwise might not view into it.&quot; Semick recruited four other runners — tw o C hinese and two westerners who had

title when he moved three

found some confidence in

and it&#39;s a very self-sustaining way of life.&quot; we went we had sticks. We J ocelyn a n d Sem i ck had to beat dogs off. We (the mapped out a section of the runners) didn&#39;t speak a comroute they thought would be mon language, but we all the most scenic. With sup- shared the same feelings.&quot; port from The North Face, The trip took place in late an outdoor product company, October andearly November they assembled a film crew 2013. Because of inclement to document the weeklong weather, the runners ended running/camping trip. up shortening the planned An adventure film compa- route of 200 miles to about ny called Spontaneous Com- 180 miles. They started in the bustion Productions w as town of Dali, at about 5,000 tasked with attempting to feet in elevation, and over the film 20 to 40 miles of running course of the week journeyed per day, about 70 percent of from an agricultural area the terrain being thick brush into the snow-capped mounor rugged mountain passes. tains, where the highest pass The documentary is about 20 was at about 15,000 feet. &quot;You&#39;d go over a high pass, minutes long. &quot;The film that came out of hit a high pasture, and then this tells A story, but I don&#39;t you&#39;d drop into a v alley,&quot; feel like it tells THE story,&quot; Semick says of the terrain Semick says. pattern. &quot;It tells more of the story T he r u nners s t ayed i n about the runners who were guest houses along the way passing through and what and camped in tents toward they overcame, but it doesn&#39;t the end of the route, where delve into the culture and sometimes the distance bethe history. But it&#39;s interest- tween villages was as much ing, and I think it might open as 60 miles. up this area to a part of the Semick says she hopes the

You know, just kind of

What:&quot;TracingtheTeaand Horse Trail,&quot; a short documentary showing as part of the Bend DocBlock of the BendFilm Festival. When:8 p.m. Friday Where:Tower Theatre in Bend. Tickets: $11 at www.bendfilm.org.

swings early,&quot; Lewis said. Wilson on course for 1st &quot;Probably the swing I European Tour win: ST.ANmade on 13, on the par 3, DREWS, Scotland — Oliver I don&#39;t know what it was, Wilson of England closed in but things just kind of on a maiden European Tour

help that a lot,&quot; she said. &quot;I

birdie on the 18th to regain

the Tower Theatre as part of the &quot;Bend Doc Block&quot; of the

Hedwall and Lewis were at 13-under 206 at Pine Valley

to take a share of the lead Golf Club. with Sweden&#39;s Caroline Lewis said a nother t i t le Hedwall heading into the would also help put distance final round of the LPGA over her closest rivals in the Reignwood Classic. race for LPGA player of the The top-ranked Lewis year.

other short films Friday at

though, because you can&#39;t force anything when you&#39;re playing golf.&quot;

Schedule your FREE consultation and findout how much YOU couldLO8E!