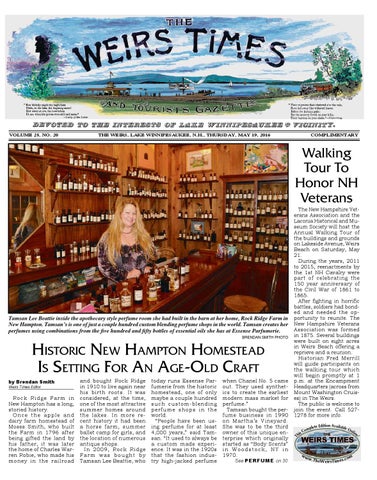 today runs Essense Parfumerie from the historic homestead, one of only maybe a couple hundred such custom-blending perfume shops in the world. “People have been using perfume for at least 4,000 years,” said Tamsan. “It used to always be a custom made experience. It was in the 1920s that the fashion industry high-jacked perfume

when Chanel No. 5 came out. They used synthetics to create the earliest modern mass market for perfume.” Tamsan bought the perfume business in 1990 on Martha’s Vineyard. She was to be the third owner of this unique enterprise which originally started as “Body Scents” in Woodstock, NY in 1970. See perfume on 30

Rock Ridge Farm in New Hampton has a long, storied history. Once the apple and dairy farm homestead of Moses Smith, who built the Farm in 1796 after being gifted the land by his father, it was later the home of Charles Warren Robie, who made his money in the railroad

and bought Rock Ridge in 1910 to live again near his birth roots. It was considered, at the time, one of the most attractive summer homes around the lakes. In more recent history it had been a horse farm, summer ballet camp for girls, and the location of numerous antique shops. In 2009, Rock Ridge Farm was bought by Tamsan Lee Beattie, who

Tamsan Lee Beattie inside the apothecary style perfume room she had built in the barn at her home, Rock Ridge Farm in New Hampton. Tamsan’s is one of just a couple hundred custom blending perfume shops in the world. Tamsan creates her perfumes using combinations from the five hundred and fifty bottles of essential oils she has at Essense Parfumerie.

The New Hampshire Veterans Association and the Laconia Historical and Museum Society will host the Annual Walking Tour of the buildings and grounds on Lakeside Avenue, Weirs Beach on Saturday, May 21. During the years, 2011 to 2015, reenactments by the 1st NH Cavalry were part of celebrating the 150 year anniversary of the Civil War of 1861 to 1865. After fighting in horrific battles, soldiers had bonded and needed the opportunity to reunite. The New Hampshire Veterans Association was formed in 1875. Several buildings were built on eight acres in Weirs Beach offering a reprieve and a reunion. Historian Fred Merrill will guide participants on the walking tour which will begin promptly at 1 p.m. at the Encampment Headquarters (across from Mount Washington Cruises) in The Weirs. The public is welcome to join the event. Call 5271278 for more info. 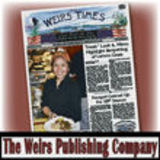