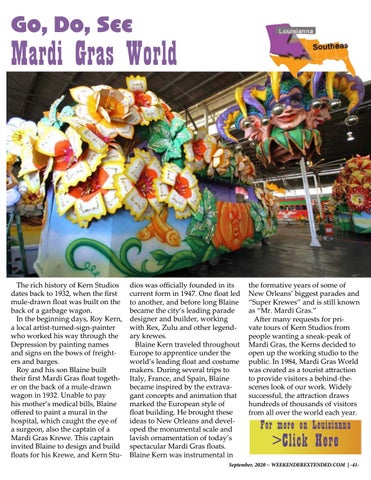 The rich history of Kern Studios dates back to 1932, when the first mule-drawn float was built on the back of a garbage wagon. In the beginning days, Roy Kern, a local artist-turned-sign-painter who worked his way through the Depression by painting names and signs on the bows of freighters and barges. Roy and his son Blaine built their first Mardi Gras float together on the back of a mule-drawn wagon in 1932. Unable to pay his mother’s medical bills, Blaine offered to paint a mural in the hospital, which caught the eye of a surgeon, also the captain of a Mardi Gras Krewe. This captain invited Blaine to design and build floats for his Krewe, and Kern Stu-

dios was officially founded in its current form in 1947. One float led to another, and before long Blaine became the city’s leading parade designer and builder, working with Rex, Zulu and other legendary krewes. Blaine Kern traveled throughout Europe to apprentice under the world’s leading float and costume makers. During several trips to Italy, France, and Spain, Blaine became inspired by the extravagant concepts and animation that marked the European style of float building. He brought these ideas to New Orleans and developed the monumental scale and lavish ornamentation of today’s spectacular Mardi Gras floats. Blaine Kern was instrumental in

the formative years of some of New Orleans’ biggest parades and “Super Krewes” and is still known as “Mr. Mardi Gras.” After many requests for private tours of Kern Studios from people wanting a sneak-peak of Mardi Gras, the Kerns decided to open up the working studio to the public. In 1984, Mardi Gras World was created as a tourist attraction to provide visitors a behind-thescenes look of our work. Widely successful, the attraction draws hundreds of thousands of visitors from all over the world each year.

For more on Louisianna

The Story Behind the Story. History and Museums. Halls of Fame and scenes to visit from movies. Places to Go, things to do, people to see - Go See Do September 2020 issue