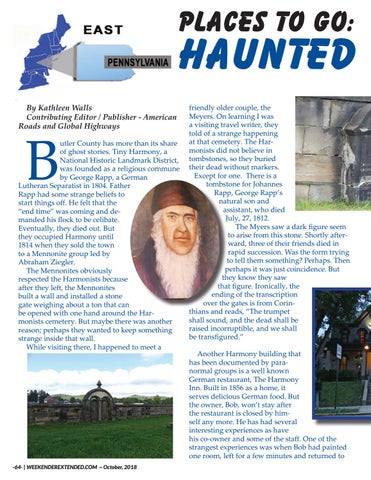 utler County has more than its share of ghost stories. Tiny Harmony, a National Historic Landmark District, was founded as a religious commune by George Rapp, a German Lutheran Separatist in 1804. Father Rapp had some strange beliefs to start things off. He felt that the “end time” was coming and demanded his flock to be celibate. Eventually, they died out. But they occupied Harmony until 1814 when they sold the town to a Mennonite group led by Abraham Ziegler. The Mennonites obviously respected the Harmonists because after they left, the Mennonites built a wall and installed a stone gate weighing about a ton that can be opened with one hand around the Harmonists cemetery. But maybe there was another reason; perhaps they wanted to keep something strange inside that wall. While visiting there, I happened to meet a

friendly older couple, the Meyers. On learning I was a visiting travel writer, they told of a strange happening at that cemetery. The Harmonists did not believe in tombstones, so they buried their dead without markers. Except for one. There is a tombstone for Johannes Rapp, George Rapp’s natural son and assistant, who died July, 27, 1812. The Myers saw a dark figure seem to arise from this stone. Shortly afterward, three of their friends died in rapid succession. Was the form trying to tell them something? Perhaps. Then perhaps it was just coincidence. But they know they saw that figure. Ironically, the ending of the transcription over the gates is from Corinthians and reads, “The trumpet shall sound, and the dead shall be raised incorruptible, and we shall be transfigured.” Another Harmony building that has been documented by paranormal groups is a well known German restaurant, The Harmony Inn. Built in 1856 as a home, it serves delicious German food. But the owner, Bob, won’t stay after the restaurant is closed by himself any more. He has had several interesting experiences as have his co-owner and some of the staff. One of the strangest experiences was when Bob had painted one room, left for a few minutes and returned to

Places to go, things to do, people to see featuring Halloween attractions and haunts