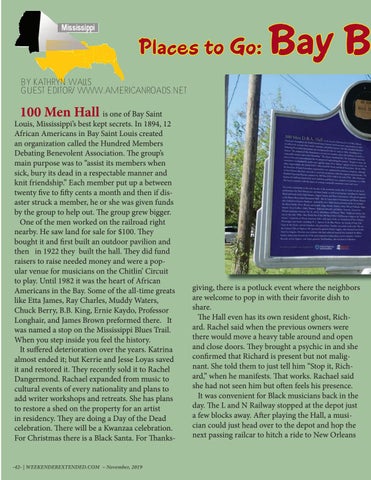 Louis, Mississippi’s best kept secrets. In 1894, 12 African Americans in Bay Saint Louis created an organization called the Hundred Members Debating Benevolent Association. The group’s main purpose was to “assist its members when sick, bury its dead in a respectable manner and knit friendship.” Each member put up a between twenty five to fifty cents a month and then if disaster struck a member, he or she was given funds by the group to help out. The group grew bigger. One of the men worked on the railroad right nearby. He saw land for sale for $100. They bought it and first built an outdoor pavilion and then in 1922 they built the hall. They did fund raisers to raise needed money and were a popular venue for musicians on the Chitlin’ Circuit to play. Until 1982 it was the heart of African Americans in the Bay. Some of the all-time greats like Etta James, Ray Charles, Muddy Waters, Chuck Berry, B.B. King, Ernie Kaydo, Professor Longhair, and James Brown preformed there. It was named a stop on the Mississippi Blues Trail. When you step inside you feel the history. It suffered deterioration over the years. Katrina almost ended it; but Kerrie and Jesse Loyas saved it and restored it. They recently sold it to Rachel Dangermond. Rachael expanded from music to cultural events of every nationality and plans to add writer workshops and retreats. She has plans to restore a shed on the property for an artist in residency. They are doing a Day of the Dead celebration. There will be a Kwanzaa celebration. For Christmas there is a Black Santa. For Thanks-42- | WEEKENDEREXTENDED.COM ~ November, 2019

giving, there is a potluck event where the neighbors are welcome to pop in with their favorite dish to share. The Hall even has its own resident ghost, Richard. Rachel said when the previous owners were there would move a heavy table around and open and close doors. They brought a psychic in and she confirmed that Richard is present but not malignant. She told them to just tell him “Stop it, Richard,” when he manifests. That works. Rachael said she had not seen him but often feels his presence. It was convenient for Black musicians back in the day. The L and N Railway stopped at the depot just a few blocks away. After playing the Hall, a musician could just head over to the depot and hop the next passing railcar to hitch a ride to New Orleans

Holiday Shopping , Thanksgiving, weekend getaways. Places to go, Things to do, and People to See in the United States for the fun side of life