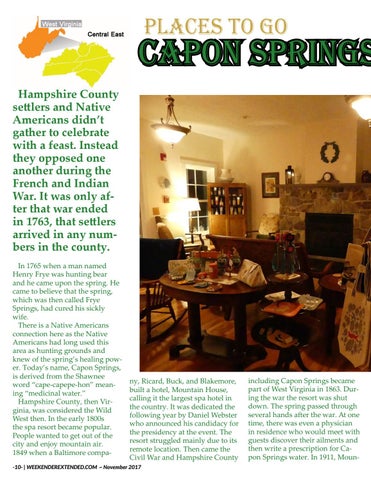 Capon Springs Hampshire County settlers and Native Americans didn’t gather to celebrate with a feast. Instead they opposed one another during the French and Indian War. It was only after that war ended in 1763, that settlers arrived in any numbers in the county. In 1765 when a man named Henry Frye was hunting bear and he came upon the spring. He came to believe that the spring, which was then called Frye Springs, had cured his sickly wife. There is a Native Americans connection here as the Native Americans had long used this area as hunting grounds and knew of the spring’s healing power. Today’s name, Capon Springs, is derived from the Shawnee word “cape-capepe-hon” meaning “medicinal water.” Hampshire County, then Virginia, was considered the Wild West then. In the early 1800s the spa resort became popular. People wanted to get out of the city and enjoy mountain air. 1849 when a Baltimore compa-

ny, Ricard, Buck, and Blakemore, built a hotel, Mountain House, calling it the largest spa hotel in the country. It was dedicated the following year by Daniel Webster who announced his candidacy for the presidency at the event. The resort struggled mainly due to its remote location. Then came the Civil War and Hampshire County

including Capon Springs became part of West Virginia in 1863. During the war the resort was shut down. The spring passed through several hands after the war. At one time, there was even a physician in residence who would meet with guests discover their ailments and then write a prescription for Capon Springs water. In 1911, Moun-

Places to go, things to do, and people to see across the U.S. Extended getaways. Weekend travel. Holiday Gift Guide Review, November issue