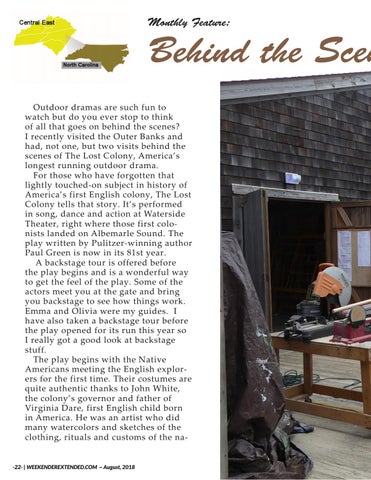 Behind the Scen Outdoor dramas are such fun to watch but do you ever stop to think of all that goes on behind the scenes? I recently visited the Outer Banks and had, not one, but two visits behind the scenes of The Lost Colony, America’s longest running outdoor drama. For those who have forgotten that lightly touched-on subject in history of America’s first English colony, The Lost Colony tells that story. It’s performed in song, dance and action at Waterside Theater, right where those first colonists landed on Albemarle Sound. The play written by Pulitzer-winning author Paul Green is now in its 81st year. A backstage tour is offered before the play begins and is a wonderful way to get the feel of the play. Some of the actors meet you at the gate and bring you backstage to see how things work. Emma and Olivia were my guides. I have also taken a backstage tour before the play opened for its run this year so I really got a good look at backstage stuff. The play begins with the Native Americans meeting the English explorers for the first time. Their costumes are quite authentic thanks to John White, the colony’s governor and father of Virginia Dare, first English child born in America. He was an artist who did many watercolors and sketches of the clothing, rituals and customs of the na-

August 2018 issue - places to go, things to do and people to see featuring "behind the scenes."