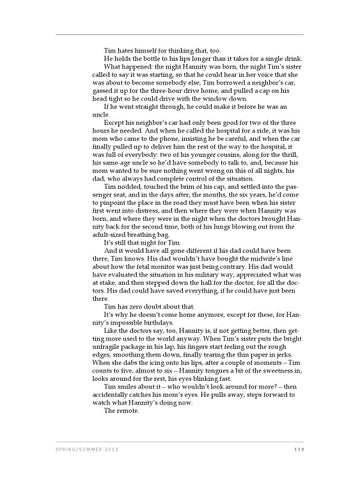 Tim hates himself for thinking that, too. He holds the bottle to his lips longer than it takes for a single drink. What happened: the night Hannity was born, the night Tim’s sister called to say it was starting, so that he could hear in her voice that she was about to become somebody else, Tim borrowed a neighbor’s car, gassed it up for the three-hour drive home, and pulled a cap on his head tight so he could drive with the window down. If he went straight through, he could make it before he was an uncle. Except his neighbor’s car had only been good for two of the three hours he needed. And when he called the hospital for a ride, it was his mom who came to the phone, insisting he be careful, and when the car finally pulled up to deliver him the rest of the way to the hospital, it was full of everybody: two of his younger cousins, along for the thrill, his same-age uncle so he’d have somebody to talk to, and, because his mom wanted to be sure nothing went wrong on this of all nights, his dad, who always had complete control of the situation. Tim nodded, touched the brim of his cap, and settled into the passenger seat, and in the days after, the months, the six years, he’d come to pinpoint the place in the road they must have been when his sister first went into distress, and then where they were when Hannity was born, and where they were in the night when the doctors brought Hannity back for the second time, both of his lungs blowing out from the adult-sized breathing bag. It’s still that night for Tim. And it would have all gone different if his dad could have been there, Tim knows. His dad wouldn’t have bought the midwife’s line about how the fetal monitor was just being contrary. His dad would have evaluated the situation in his military way, appreciated what was at stake, and then stepped down the hall for the doctor, for all the doctors. His dad could have saved everything, if he could have just been there. Tim has zero doubt about that. It’s why he doesn’t come home anymore, except for these, for Hannity’s impossible birthdays. Like the doctors say, too, Hannity is, if not getting better, then getting more used to the world anyway. When Tim’s sister puts the bright unfragile package in his lap, his fingers start feeling out the rough edges, smoothing them down, finally tearing the thin paper in jerks. When she dabs the icing onto his lips, after a couple of moments—Tim counts to five, almost to six—Hannity tongues a bit of the sweetness in, looks around for the rest, his eyes blinking fast. Tim smiles about it—who wouldn’t look around for more?—then accidentally catches his mom’s eyes. He pulls away, steps forward to watch what Hannity’s doing now. The remote. 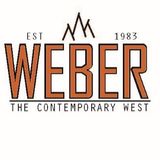