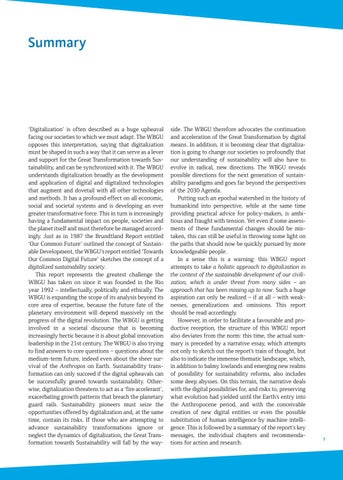 ‘Digitalization’ is often described as a huge upheaval facing our societies to which we must adapt. The WBGU opposes this interpretation, saying that digitalization must be shaped in such a way that it can serve as a lever and support for the Great Transformation towards Sustainability, and can be synchronized with it. The WBGU understands digitalization broadly as the development and application of digital and digitalized technologies that augment and dovetail with all other technologies and methods. It has a profound effect on all economic, social and societal systems and is developing an ever greater transformative force. This in turn is increasingly having a fundamental impact on people, societies and the planet itself and must therefore be managed accordingly. Just as in 1987 the Brundtland Report entitled ‘Our Common Future’ outlined the concept of Sustain­ able Development, the WBGU’s report entitled ‘Towards Our Common Digital Future’ sketches the concept of a digitalized sustainability society. This report represents the greatest challenge the WBGU has taken on since it was founded in the Rio year 1992 – intellectually, politically and ethically. The WBGU is expanding the scope of its analysis beyond its core area of expertise, because the future fate of the planetary environment will depend massively on the progress of the digital revolution. The WBGU is getting involved in a societal discourse that is becoming increasingly hectic because it is about global innovation leadership in the 21st century. The WBGU is also trying to find answers to core questions – questions about the medium-term future, indeed even about the sheer survival of the Anthropos on Earth. Sustainability transformation can only succeed if the digital upheavals can be successfully geared towards sustainability. Otherwise, digitalization threatens to act as a ‘fire accelerant’, exacerbating growth patterns that breach the planetary guard rails. Sustainability pioneers must seize the opportunities offered by digitalization and, at the same time, contain its risks. If those who are attempting to advance sustainability transformations ignore or neglect the dynamics of digitalization, the Great Transformation towards Sustainability will fall by the way-

side. The WBGU therefore advocates the continuation and acceleration of the Great Transformation by digital means. In addition, it is becoming clear that digitalization is going to change our societies so profoundly that our understanding of sustainability will also have to evolve in radical, new directions. The WBGU reveals possible directions for the next generation of sustain­ ability paradigms and goes far beyond the perspectives of the 2030 Agenda. Putting such an epochal watershed in the history of humankind into perspective, while at the same time providing practical advice for policy-makers, is ambi­ tious and fraught with tension. Yet even if some assessments of these fundamental changes should be mistaken, this can still be useful in throwing some light on the paths that should now be quickly pursued by more knowledgeable people. In a sense this is a warning: this WBGU report attempts to take a holistic approach to digitalization in the context of the sustainable development of our civilization, which is under threat from many sides – an approach that has been missing up to now. Such a huge aspiration can only be realized – if at all – with weaknesses, generalizations and omissions. This report should be read accordingly. However, in order to facilitate a favourable and productive reception, the structure of this WBGU report also deviates from the norm: this time, the actual summary is preceded by a narrative essay, which attempts not only to sketch out the report’s train of thought, but also to indicate the immense thematic landscape, which, in addition to balmy lowlands and emerging new realms of possibility for sustainability reforms, also includes some deep abysses. On this terrain, the narrative deals with the digital possibilities for, and risks to, preserving what evolution had yielded until the Earth’s entry into the Anthropocene period, and with the conceivable creation of new digital entities or even the possible substitution of human intelligence by machine intelligence. This is followed by a summary of the report’s key messages, the individual chapters and recommenda­ tions for action and research.