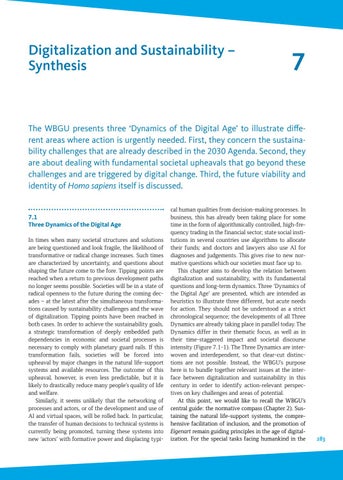 The WBGU presents three ‘Dynamics of the Digital Age’ to illustrate different areas where action is urgently needed. First, they concern the sustaina­ bility challenges that are already described in the 2030 Agenda. Second, they are about dealing with fundamental societal upheavals that go beyond these challenges and are triggered by digital change. Third, the future viability and identity of Homo sapiens itself is discussed.

7.1 Three Dynamics of the Digital Age In times when many societal structures and solutions are being questioned and look fragile, the likelihood of transformative or radical change increases. Such times are characterized by uncertainty, and questions about shaping the future come to the fore. Tipping points are reached when a return to previous development paths no longer seems possible. Societies will be in a state of radical openness to the future during the coming decades – at the latest after the simultaneous transformations caused by sustainability challenges and the wave of digitalization. Tipping points have been reached in both cases. In order to achieve the sustainability goals, a strategic transformation of deeply embedded path dependencies in economic and societal processes is necessary to comply with planetary guard rails. If this transformation fails, societies will be forced into upheaval by major changes in the natural life-support systems and available resources. The outcome of this upheaval, however, is even less predictable, but it is likely to drastically reduce many people’s quality of life and welfare. Similarly, it seems unlikely that the networking of processes and actors, or of the development and use of AI and virtual spaces, will be rolled back. In particular, the transfer of human decisions to technical systems is currently being promoted, turning these systems into new ‘actors’ with formative power and displacing typi-

cal human qualities from decision-making processes. In business, this has already been taking place for some time in the form of algorithmically controlled, high-frequency trading in the financial sector; state social institutions in several countries use algorithms to allocate their funds; and doctors and lawyers also use AI for diagnoses and judgements. This gives rise to new normative questions which our societies must face up to. This chapter aims to develop the relation between digitalization and sustainability, with its fundamental questions and long-term dynamics. Three ‘Dynamics of the Digital Age’ are presented, which are intended as heuristics to illustrate three different, but acute needs for action. They should not be understood as a strict chronological sequence; the developments of all Three Dynamics are already taking place in parallel today. The Dynamics differ in their thematic focus, as well as in their time-staggered impact and societal discourse intensity (Figure 7.1-1). The Three Dynamics are interwoven and interdependent, so that clear-cut distinctions are not possible. Instead, the WBGU’s purpose here is to bundle together relevant issues at the interface between digitalization and sustainability in this century in order to identify action-relevant perspectives on key challenges and areas of potential. At this point, we would like to recall the WBGU’s central guide: the normative compass (Chapter 2). Sustaining the natural life-support systems, the comprehensive facilitation of inclusion, and the promotion of Eigenart remain guiding principles in the age of digitalization. For the special tasks facing humankind in the