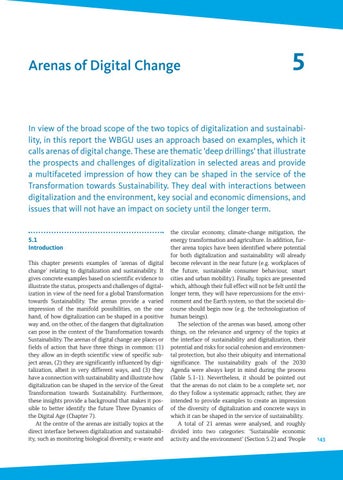 In view of the broad scope of the two topics of digitalization and sustainability, in this report the WBGU uses an approach based on examples, which it calls arenas of digital change. These are thematic 'deep drillings' that illustrate the prospects and challenges of digitalization in selected areas and provide a multifaceted impression of how they can be shaped in the service of the Transformation towards Sustainability. They deal with interactions between digitalization and the environment, key social and economic dimensions, and issues that will not have an impact on society until the longer term.

the circular economy, climate-change mitigation, the energy transformation and agriculture. In addition, further arena topics have been identified where potential for both digitalization and sustainability will already become relevant in the near future (e.g. workplaces of the future, sustainable consumer behaviour, smart cities and urban mobility). Finally, topics are presented which, although their full effect will not be felt until the longer term, they will have repercussions for the environment and the Earth system, so that the societal discourse should begin now (e.g. the technologization of human beings). The selection of the arenas was based, among other things, on the relevance and urgency of the topics at the interface of sustainability and digitalization, their potential and risks for social cohesion and environmental protection, but also their ubiquity and international significance. The sustainability goals of the 2030 Agenda were always kept in mind during the process (Table 5.1‑1). Nevertheless, it should be pointed out that the arenas do not claim to be a complete set, nor do they follow a systematic approach; rather, they are intended to provide examples to create an impression of the diversity of digitalization and concrete ways in which it can be shaped in the service of sustainability. A total of 21 arenas were analysed, and roughly divided into two categories: ‘Sustainable economic activity and the environment’ (Section 5.2) and ‘People