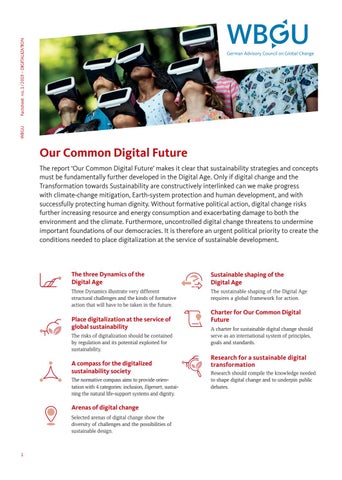 Our Common Digital Future The report â&#x20AC;&#x2DC;Our Common Digital Futureâ&#x20AC;&#x2122; makes it clear that sustainability strategies and concepts must be fundamentally further developed in the Digital Age. Only if digital change and the Transformation towards Sustainability are constructively interlinked can we make progress with climate-change mitigation, Earth-system protection and human development, and with successfully protecting human dignity. Without formative political action, digital change risks further increasing resource and energy consumption and exacerbating damage to both the environment and the climate. Furthermore, uncontrolled digital change threatens to undermine important foundations of our democracies. It is therefore an urgent political priority to create the conditions needed to place digitalization at the service of sustainable development.

The three Dynamics of the Digital Age

Sustainable shaping of the Digital Age

Three Dynamics illustrate very different structural challenges and the kinds of formative action that will have to be taken in the future.

The sustainable shaping of the Digital Age requires a global framework for action.

A compass for the digitalized sustainability society The normative compass aims to provide orientation with 4 categories: inclusion, Eigenart, sustaining the natural life-support systems and dignity.

Charter for Our Common Digital Future A charter for sustainable digital change should serve as an international system of principles, goals and standards.

Research for a sustainable digital transformation Research should compile the knowledge needed to shape digital change and to underpin public debates.

The three Dynamics of the Digital Age

In order to gain more clarity about the digital future, its key challenges and how it needs to be shaped, the WBGU has identified three different Dynamics of this upheaval (Figure 1). In the short term, the aim must be to harmonize digitalization with the sustainable development goals (SDGs, Agenda 2030) agreed in 2015 and with the goals of the Paris Climate Agreement (First Dynamic). The use of new technologies should focus on giving people access to basic services such as healthcare, education and energy, and on preventing environmental degradation. Furthermore, precautions must already be taken today to deal with the societal upheavals that are likely to accompany digitalization in the medium term (Second Dynamic). Examples include the foreseeable radical structural change on the labour markets as a result of advancing automation and the effects of an ever-more networked world society. Both developments must be monitored politically in such a way that they do not run contrary to the common good or social cohesion. Finally, it is also a matter of preparing for possible long-term changes (Third Dynamic). For example, risks to human decisionmaking sovereignty and integrity are already discernible today in the interaction between humans and machines. This concerns, for example, sensitive neurodata and brain-controlled neuro-

prostheses, where ethical aspects have hardly been taken into account up to now. Similarly, the impact of ever-increasing digital communication (e.g. 3D glasses) on human emotions and abilities is a largely unexplored field. The key challenge for the world community is to develop a common vision for a desirable human self-image and good relations between humans and the environment in a digitalized future.

Place digitalization at the service of global sustainability ‘Digitalization’ is often described as a huge upheaval facing our societies to which we must adapt. The WBGU disagrees with this interpretation, saying that digitalization must and can be shaped – also in a way that supports the necessary Great Transformation towards Sustainability. A key task of the coming decades must be to harness new technological possibilities – such as big data, artificial intelligence and the Internet of Things – to serve globally sustainable development. To do this, ways must be found to prevent risks such as accelerated resource and energy consumption, possibilities of total surveillance, inappropriately applied algorithmic decision-making and scoring procedures and, last but not least, a growing digital divide.

A compass for the digitalized sustainability society The Digital Age involves new challenges for the protection of fundamental and human rights. In the digital domain, safe spaces are changing, as are available options for exercising these rights, so that new assurances are required here. Human dignity is the focal, unchangeable point of reference in this context. In the WBGU report, the inviolability of human dignity explicitly serves as a maxim for the task of making digitalization sustainable. Closely linked to this is the need to ensure an orientation towards the common good (inclusion and Eigenart) and to embed digital change into a strategy for sustaining the natural life-support systems (Figure 2). This requires creating appropriate frameworks and demarcations. Natural life-support systems

Figure 2: A normative compass for a sustainable Digital Age Normative compass for the Great Transformation towards Sustainability in a digitalized society. The transformation can be achieved by interaction and a balance between three dimensions: i.e. sustaining the natural life-support systems, inclusion and Eigenart (a German word meaning character). Source: WBGU

Arenas of digital change In view of the broad thematic scope of the report, the WBGU uses selected examples – ‘arenas’ – to illustrate the status, prospects and challenges of digitalization in key societal areas. Some of the arenas are directly at the interface between the environment and digitalization, e.g. energy/resource consumption and land use. Others throw light on the interaction between digitalization and societal dimensions of sustainability, e.g. the future of work or digitally supported mobility. Finally, topics are addressed which, although already the subject of debate today, will only impact on society in the longer term (e.g. the development of a collective global environmental awareness). These thematic ‘deep drillings’ not only generate concrete material leading to recommendations for action and research; they are also one of the essential sources informing the WBGU’s perspective and messages on the topic as a whole. 2 – 3

Sustainable shaping of the Digital Age The issue of ‘digitalization and sustainability’ is not embedded firmly enough in global governance architecture, nor is there agreement among the international community of states on a common framework for action. No suitable form of global governance has yet developed for the globally operating and dynamically growing international digital economy either. Germany and the EU should advocate a UN Summit for a ‘Sustainable Digital Age’ 30 years after the UN Conference on Environment and Development in 2022. A key outcome of this UN summit could be the adoption of a charter on ‘Our Common Digital Future’. In preparation for the UN summit, a ‘World Commission on Sustainability in the Digital Age’ should be appointed, modelled on the Brundtland Commission. The European Union should lead the way in integrating sustainability and digitalization. With the European General Data Protection Regulation, the EU has already assumed a spearheading role in the protection of personal data. The new European Commission (2019) now has an opportunity to integrate digitalization with important elements of sustainability policy (environmental protection in the Charter of Fundamental Rights, the Environmental Action Programme, the decarbonization strategy up to 2050) in an overarching and groundbreaking SDG implementation strategy. Deliberations on ethical principles for AI or on how digital change should be used to implement the SDGs are still in their early stages. By adopting an ‘EU strategy for sustainability in the Digital Age’ the EU could make an international name for itself as a sustainable environment in which to live and work.

Charter for a sustainable Digital Age The institutional framework for global sustainable development in the Digital Age needs a common point of reference. The charter drafted by the WBGU is intended to serve as a system of principles, goals and standards for the international community and to link digital change with the necessary global sustainability perspective. It formulates goals and principles for protecting human dignity, the natural life-support systems, inclusion in and access to digital and digitalized infrastructures and technologies, as well as individual and collective freedom of development in the Digital Age. On this basis, the charter fleshes out guidelines for action to be drawn up by the international community in view of the challenges of the Digital Age. The charter presented for discussion by the WBGU contains three core elements: First, digitalization should be designed in line with the 2030 Agenda, and digital technology should be used to achieve the SDGs. Second, beyond the 2030 Agenda, systemic risks should be reduced by particularly protecting civil and human rights, avoiding upheavals on the labour markets, and ensuring decision-making sovereignty. Third, societies must lay down procedures to prepare themselves for future challenges, e.g. by agreeing ethical guidelines and ensuring future-oriented research and education. The charter not only aims to provide stimuli for sustainability policy within the United Nations, but could also form the framework for the EU to develop its own digitalization model for a sustainable environment in which to live and work.

Research for a sustainable digital transformation Assessments of the impact of digitalization, e.g. on the consumption of rare earths, are often contradictory and highly uncertain. At the same time, the range of instruments offered by digitalization makes it possible to conduct a wide range of observations and analyses. Science now has the task of creating more reliable knowledge about the effects of digital technologies as a basis for socio-political discourses and making this knowledge available to the international community via digital commons. Furthermore, public and private technology research should systematically consider questions of ethics and sustainability. The WBGU proposes the following overarching lines of research to create more knowledge for a digital sustainable transformation: ›

Research on digitalization for sustainability (First Dynamic): How can digital technologies, digitalized infrastructures, and digitalized systems and end devices be made sustainable, especially with regard to their energy and resource consumption and the establishment of a circular economy? How can digitalization be used as an instrument to implement the SDGs and for decarbonizing today’s economic and social system?

Research for sustainable digital societies (Second Dynamic): How can societies be preserved that are both capable of taking action and able to assess the system-changing impact and related uncertainties of digitalization, and can also proactively and sustainably shape that impact and successfully counter unintended consequences? Important tasks for research include studying systemic risks and potential, developing new forms of inclusion in the context of work in the future, shaping human-machine interactions, and empowering the individual in digitalized sustainability societies. The funding of research into the impact of AI on the digitalized sustainability society should be significantly increased.

Research on the future of Homo sapiens (Third Dynamic): Being human is itself becoming a topic of sustainable development as a result of digital change. To what extent should old and new ideas of what it means to be human be questioned in the light of a possible dovetailing of humans and technology and the increasing cooperation between humans and machines? How can the preservation of human dignity be ensured?

and Development (Rio Earth Summit). The WBGU’s task is to analyse global environmental and development

Core messages of the flagship report ‘Our Common Digital Future’

Core messages of the flagship report ‘Our Common Digital Future’