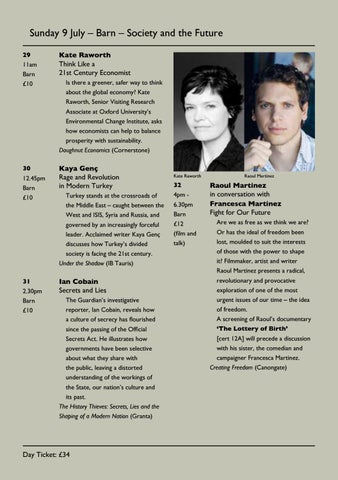 Turkey stands at the crossroads of the Middle East – caught between the West and ISIS, Syria and Russia, and governed by an increasingly forceful leader. Acclaimed writer Kaya Genç discusses how Turkey’s divided society is facing the 21st century. Under the Shadow (IB Tauris)

Ian Cobain Secrets and Lies The Guardian’s investigative reporter, Ian Cobain, reveals how a culture of secrecy has flourished since the passing of the Official Secrets Act. He illustrates how governments have been selective about what they share with the public, leaving a distorted understanding of the workings of the State, our nation’s culture and its past. The History Thieves: Secrets, Lies and the Shaping of a Modern Nation (Granta)

Raoul Martinez in conversation with Francesca Martinez Fight for Our Future Are we as free as we think we are? Or has the ideal of freedom been lost, moulded to suit the interests of those with the power to shape it? Filmmaker, artist and writer Raoul Martinez presents a radical, revolutionary and provocative exploration of one of the most urgent issues of our time – the idea of freedom. A screening of Raoul’s documentary ‘The Lottery of Birth’ [cert 12A] will precede a discussion with his sister, the comedian and campaigner Francesca Martinez. Creating Freedom (Canongate)