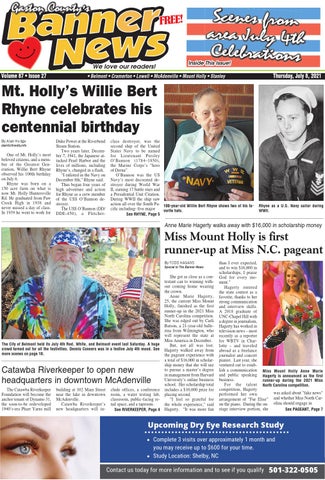 One of Mt. Holly’s most beloved citizens, and a member of the Greatest Generation, Willie Bert Rhyne observed his 100th birthday on July 6. Rhyne was born on a 150 acre farm on what is now Mt. Holly Huntersville Rd. He graduated from Paw Creek High in 1938 and never missed a day of class. In 1939 he went to work for

Duke Power at the Riverbend Steam Station. Two years later, December 7, 1941, the Japanese attacked Pearl Harbor and the lives of millions, including Rhyne’s, changed in a flash. “I enlisted in the Navy on December 8th,” Rhyne said. Thus began four years of high adventure and action for Rhyne as a crew member of the USS O’Bannon destroyer. The USS O’Bannon (DD/ DDE-450), a Fletcher-

class destroyer, was the second ship of the United States Navy to be named for Lieutenant Presley O’Bannon (1784–1850), the Marine Corps’s “hero of Derna”. O’Bannon was the US Navy’s most decorated destroyer during World War II, earning 17 battle stars and a Presidential Unit Citation. During WWII the ship saw action all over the South Pa- 100-year-old Willie Bert Rhyne shows two of his facific including- five major vorite hats. See RHYNE, Page 5

Rhyne as a U.S. Navy sailor during WWII.

Anne Marie Hagerty walks away with $16,000 in scholarship money

The City of Belmont held its July 4th Red, White, and Belmont event last Saturday. A huge crowd turned out for all the festivities. Dennis Conners was in a festive July 4th mood. See more scenes on page 10.

building at 102 Main Street near the lake in downtown McAdenville. Catawba Riverkeeper’s new headquarters will in-

She got as close as a contestant can to winning without coming home wearing the crown. Anne Marie Hagerty, 25, the current Miss Mount Holly, finished as the first runner-up in the 2021 Miss North Carolina competition. She was edged out by Carli Batson, a 21-year-old ballerina from Wilmington, who will represent the state at Miss America in December. But, not all was lost. Hagerty walked away from the pageant experience with a total of $16,000 in scholarship money that she will use to pursue a master’s degree in management from Harvard University’s online business school. Her scholarship total includes a $10,000 prize for placing second. “I feel so grateful for the whole experience,” said Hagerty. “It was more fun

than I ever expected, and to win $16,000 in scholarships, I praise God for every moment.” Hagerty entered the state contest as a favorite, thanks to her strong communication and interview skills. A 2018 graduate of UNC-Chapel Hill with a degree in journalism, Hagerty has worked in television news – most recently as a reporter for WBTV in Charlotte – and traveled abroad as a freelance journalist and concert pianist. Last year, she ventured out to establish a communication Miss Mount Holly Anne Marie and public speaking Hagerty is announced as the first business. runner-up during the 2021 Miss For the talent North Carolina competition. competition, Hagerty was asked about “fake news” performed her own arrangement of “Fur Elise” and whether Miss North Caron the piano. During the on- olina should engage in stage interview portion, she See PAGEANT, Page 7

Upcoming Dry Eye Research Study Complete 3 visits over approximately 1 month and you may receive up to $600 for your time. Study Location: Shelby, NC