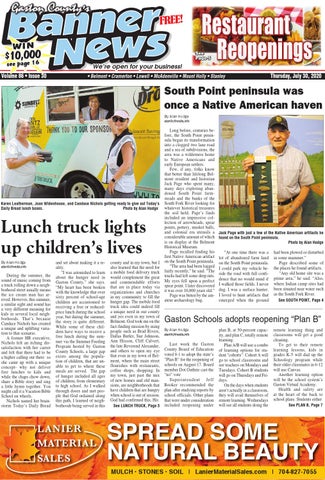 South Point peninsula was once a Native American haven By Alan Hodge alan@cfmedia.info

During the summer, the sound of music coming from a truck rolling down a neighborhood street usually means the ice cream man has arrived. However, this summer, a similar sight and sound has a very different meaning for kids in several local neighborhoods. That’s because Candace Nichols has created a unique and uplifting variation to that scenario. A former HR executive, Nichols felt an itching dissatisfaction with her career and felt that there had to be a higher calling out there so she came up with a unique concept- why not deliver free lunches to kids and while the chaps chow down, share a Bible story and sing a little hymn together. You might call it a Vacation Bible School on wheels. Nichols named her brainstorm Today’s Daily Bread

and set about making it a reality. “I was astonished to learn about the hunger need in Gaston County,” she says. “My heart has been broken with the knowledge that over sixty percent of school-age children are accustomed to receiving a free or reducedprice lunch during the school year, but during the summer, the story is quite different. While some of these children have ways to receive a free lunch during the summer via the Summer Feeding Program hosted by Gaston County Schools, a large gap exists among the population of children, that are unable to get to where these meals are served. The gap of hunger included all ages of children, from elementary to high school. As I walked through doors and met people that God ordained along this path, I learned of neighborhoods being served in this

county and in my town, but I also learned that the need for a mobile food delivery truck would complement the great and commendable efforts that are in place today via organizations and churches in my community to fill the hunger gap. The mobile food truck idea could indeed fill a unique need in our county and yes even in my town of Belmont. God took me on the fact-finding mission by using people such as Brad Rivers, Dallas Butler, Sue Johnson, Ann Hixson, Cliff Calvert, the late Reverend Alexander, and others to open my eye that even in my town of Belmont, where the main street flourishes with restaurants, coffee shops, shopping. In my town, just past the mix of new homes and old mansions, are neighborhoods that have children that are hungry when school is out of session. God had confirmed this, His See LUNCH TRUCK, Page 3

Long before, centuries before, the South Point peninsula began its transformation into a clogged two lane road and a sea of subdivisions, the area was a wilderness home to Native Americans and early European settlers. Few, if any, folks know that better than lifelong Belmont resident and historian Jack Page who spent many, many days exploring abandoned South Point farmsteads and the banks of the South Fork River looking for whatever historical treasures the soil held. Page’s finds included an impressive collection of arrowheads, spear points, pottery, musket balls, and colonial era utensils a considerable amount of which is on display at the Belmont Historical Museum. Page recalled finding his first Native American artifact on the South Point peninsula. “The area had been logged fairly recently,” he said. “The trucks had left some deep ruts. My eyes fell upon a perfect spear point. I later discovered it was over 10,000 years old.” Page was bitten by the amateur archaeology bug.

Jack Page with just a few of the Native American artifacts he found on the South Point peninsula. Photo by Alan Hodge “At one time there was a lot of abandoned farm land on the South Point peninsula. I could park my vehicle beside the road with full confidence that no would mind if I walked those fields. I never dug. I was a surface hunter. I loved to hunt artifacts that emerged when the ground

had been plowed or disturbed in some mammer.” Page described some of the places he found artifacts. “Any old home site was a prime area,” he said. “Also, where Indian camp sites had been situated near water such as the South Fork River. See SOUTH POINT, Page 4

Last week the Gaston County Board of Education voted 8-1 to adopt the state’s “Plan B” for the reopening of schools on August 17. Board member Dot Guthrie cast the “no” vote Superintendent Jeff Booker recommended the plan after studying reports by school officials. Other plans that were under consideration included reopening under

plan B, at 50-percent capacity, and plan C, totally remote learning. Plan A/B will use a combo of learning options for student “cohorts”. Cohort A will go to school classrooms and see teachers on Mondays and Tuesdays. Cohort B students will go on Thursdays and Fridays. On the days when students aren’t actually in a classroom, they will avail themselves of remote learning. Wednesdays will see all students doing the

remote learning thing and classrooms will get a good cleaning. To get to their remote learning lessons, kids in grades K-5 will dial up the Schoology program while their older classmates in 6-12 will use Canvas. Another learning option will be the school system’s Gaston Virtual Academy. Health and safety are at the heart of the back to school plans. Students either See PLAN B, Page 7