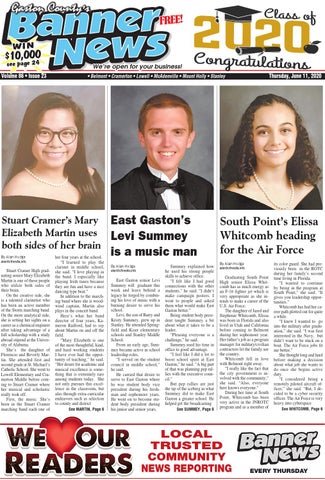 Stuart Cramer High graduating senior Mary Elizabeth Martin is one of those people who utilize both sides of their brain. On the creative side, she is a talented clarinetist who has been an active member of the Storm marching band. On the more analytical side, she is setting her sights on a career as a chemical engineer after taking advantage of a full scholarship with a study abroad stipend at the University of Alabama. She’s the daughter of Florencio and Beverly Martin. She attended first and second grade at St. Michael’s Catholic School. She went to Lowell Elementary and Cramerton Middle before coming to Stuart Cramer where her musical and scholastic really took off. First, the music. She’s been in the Stuart Cramer marching band each one of

her four years at the school. “I learned to play the clarinet in middle school, she said. “I love playing in the band. I especially like playing Irish tunes because they are fun and have a nice dancing type beat.” In addition to the marching band where she is woodwind captain, Martin also plays in the concert band. Here’s what her band director of four years, Kameron Radford, had to say about Martin on and off the field. “Mary Elizabeth is one of the most thoughtful, kind, and hard working students I have ever had the opportunity of teaching,” he said. “Her desire for academic and musical excellence is something that is extremely rare among students today. She not only pursues this excellence in the classroom, but also through extra-curricular endeavors such as selection to county and district See MARTIN, Page 6

East Gaston senior Levi Summey will graduate this week and leave behind a legacy he forged by combining his love of music with a burning desire to serve his school. Levi, the son of Barry and Kristy Summey, grew up in Stanley. He attended Springfield and Kiser elementary schools and Stanley Middle School. From an early age, Summey became active in school leadership roles. “I served on the student council in middle school,” he said. He carried that desire to serve to East Gaston where he was student body vice president during his freshman and sophomore years. He went on to become student body president during his junior and senior years.

Summey explained how he used his strong people skills to achieve office. “I felt like I had good connections with the other students,” he said. “I didn’t make campaign posters. I went to people and asked them what would make East Gaston better.” Being student body president taught Summey a bit about what it takes to be a leader. “Pleasing everyone is a challenge,” he said. Summey used his time in office to good advantage. “I feel like I did a lot to boost school spirit at East Gaston,” he said. “A big part of that was planning pep rallies with the executive council.” But pep rallies are just the tip of the iceberg in what Summey did to make East Gaston a greater school. He helped get the broadcasting See SUMMEY, Page 6

Graduating South Point High senior Elissa Whitcomb has as much energy as an F-16 fighter jet which is very appropriate as she intends to make a career of the U.S. Air Force. The daughter of Jared and Stephenie Whitcomb, Elissa was born in Florida and also lived in Utah and California before coming to Belmont during her sophomore year. Her father’s job as a program manager for military/civilian contractors let the family see the country. Whitcomb fell in love with Belmont right away. “I really like the fact that the city government is involved with the community,” she said. “Also, everyone here knows everyone.” During her time at South Point, Whitcomb has been very active in the JNROTC program and as a member of

its color guard. She had previously been in the ROTC during her family’s second time living in Florida. “I wanted to continue by being in the program at South Point,” she said. “It gives you leadership opportunities.” Whitcomb has had her career path plotted out for quite a while. “I knew I wanted to go into the military after graduation,” she said. “I was first interested in the Navy, but didn’t want to be stuck on a boat. The Air Force jobs fit me better.” She thought long and hard before making a decision about what job she wants to do once she begins active duty. “I considered being a remotely piloted aircraft officer,” she said. “But, I decided to be a cyber security officer. The Air Force is very heavy into cyberspace See WHITCOMB, Page 6