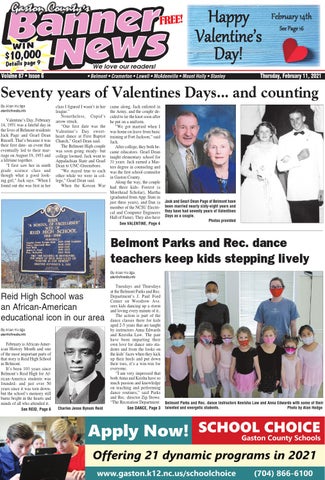 Valentine’s Day, February 14, 1951 was a fateful day in the lives of Belmont residents Jack Page and Gearl Dean Russell. That’s because it was their first date- an event that eventually led to their marriage on August 19, 1953 and a lifetime together. “I first saw her in ninth grade science class and though what a good looking girl,” Jack says. “When I found out she was first in her

class I figured I wasn’t in her league.” Nonetheless, Cupid’s arrow struck. “Our first date was the Valentine’s Day sweetheart dance at First Baptist Church,” Gearl Dean said. The Belmont High couple was soon going steady- but college loomed. Jack went to Appalachian State and Gearl Dean to UNC-Greensboro. “We stayed true to each other while we were in college,” Gearl Dean said. When the Korean War

came along, Jack enlisted in the Army, and the couple decided to tie the knot soon after he put on a uniform. “We got married when I was home on leave from basic training at Fort Jackson,” said Jack. After college, they both became educators. Gearl Dean taught elementary school for 31 years. Jack earned a Masters degree in counseling and was the first school counselor in Gaston County. Along the way, the couple had three kids- Forrest (a Morehead Scholar), Martha (graduated from App. State in just three years), and Dan (a member of the NCSU Electrical and Computer Engineers Hall of Fame). They also have See VALENTINE, Page 4

Jack and Gearl Dean Page of Belmont have been married nearly sixty-eight years and they have had seventy years of Valentines Days as a couple. Photos provided

Reid High School was an African-American educational icon in our area By Alan Hodge alan@cfmedia.info

February is African-American History Month and one of the most important parts of that story is Reid High School in Belmont. It’s been 103 years since Belmont’s Reid High for African-America students was founded- and just over 50 years since it was torn downbut the school’s memory still burns bright in the hearts and minds of all who attended it. See REID, Page 6

Tuesdays and Thursdays at the Belmont Parks and Rec. Department’s J. Paul Ford Center on Woodrow Ave. sees kids dancing up a storm and loving every minute of it.. The action is part of the dance classes there for kids aged 2-5 years that are taught by instructors Anna Edwards and Keeisha Law. The pair have been imparting their own love for dance into students and from the looks on the kids’ faces when they kick up their heels and put down their toes, it’s a win-win for everyone. “I am very impressed that both Anna and Keisha have so much passion and knowledge on teaching and performing dance routines,” said Parks and Rec. director Zip Stowe. “The Recreation Department See DANCE, Page 3

Belmont Parks and Rec. dance instructors Keeisha Law and Anna Edwards with some of their talented and energetic students. Photo by Alan Hodge