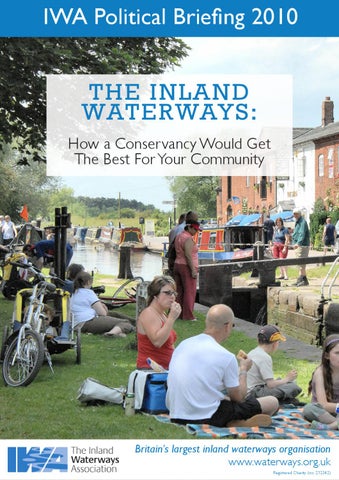 IWA Political Briefing 2010 THE INLAND WATERWAYS: How a Conservancy Would Get The Best For Your Community

The Inland Waterways Of Britain There are approximately 3160 miles of fully navigable inland waterway in England and Wales and another 1179 miles is being actively restored. Why Do The Waterways Matter? The waterways can build and renew communities. They can deliver: •

Please Do Your Bit Everyone – MPs, local councillors, community groups, businesses and individuals – gains from well maintained, well used waterways. Think about what you and your local community gain from them and what you would lose if they disappeared. Please do whatever you can to support your local waterways. Make sure that all levels of government and local community groups know what your distinctive local waterways deliver. You could even get your hands dirty volunteering to find out more from enthusiasts. The future of the waterways is best served through the establishment of a national inland waterways conservancy. Please help to make this happen.

10 Facts About The Waterways • A record 13 million people now visit British Waterways’ canals – and that is only half the waterways network. • Over half the population lives within about 10 minutes of a waterway. • The UK leisure and small commercial marine industry is worth over £3 billion to UK Plc; it directly employs about 34,300 people. • £1 of taxpayers money spent on the waterways gets a MINIMUM economic return of at least £6. It can be a lot higher where there is regeneration. • IWA’s Waterway Recovery Group provides 5000 volunteering days each year. • British Waterways alone is the third largest owner of historic structures in the country; it has 5 World Heritage Sites. • Waterborne freight can reduce CO² emissions BY AT LEAST 75% compared with road transport; and waterborne freight is INCREASING. • Boating demand, despite the recession, has increased. Numbers on the main Government funded navigations have INCREASED by over 5% and are at record numbers. • Over 90% of the population believe that canals are an important and valued national asset. • The money that the two main publicly owned navigations (British Waterways and the Environment Agency) need from Government to run their waterways properly is less than the cost of building 4 miles of motorway and LESS THAN 0.02% of government spending.

The Inland Waterways Are Important – They Deserve A Conservancy

How Do The Waterways Benefit Communities? Community health and leisure: the use of the waterways corridor for leisure benefits the health of the nation.

working, and giving back to society. All integral to Big Society.

Walking, jogging and cycling on flat terrain helps the healthy to remain fit and is ideal exercise for those recovering from illness. This improved health can help to make savings in the £120bn plus public spend on health.

The waterways are a much loved recreational opportunity for the 13 million people who make boating trips each year; and angling is the largest mass participation sport in Britain – with numbers continuing to increase. There are now nearly 1.4 million anglers, contributing about £1bn to the economy.

Regeneration: there is a strong body of evidence that shows how restored canals are a catalyst for regeneration in run down urban areas and an essential component of those redeveloped areas. There are too many examples to list here. But outstanding success is in evidence in Birmingham, Manchester, Sheffield and Gloucester. Here well maintained and used waterways are a focus for waterside housing, commercial development and leisure such as shops, public houses and restaurants. Trade: The leisure and small commercial marine industry is worth £3.1 billion in trade and directly employs about 34,300 people.

Social cohesion and integration: access to the waterways is free. They offer low cost opportunities for – the elderly, the disabled, ethnic minorities, and those that are hard to reach such as people with learning difficulties and ex-offenders – to make use of open space and engage with others in the community.

Marinas are estimated to deliver trade about 7 times the direct income from berths (£55.9 million), supporting a further 10 jobs over and above those employed directly in the marina business. There are also many hundreds of marine businesses on the inland waterways – boatyards, boat sales, chandlery, etc.

They offer an educational facility for the young; and volunteering is an excellent opportunity for learning new skills, building self esteem, team

Revenue from tourism is estimated to be up to £1 billion, and that would be far higher when taking into account all non-boating visits which

is estimated to be about 500 million per year. Heritage: only the Church of England and the National Trust have more listed buildings and structures than British Waterways. Altogether, waterway authorities are responsible for some 4000 heritage assets. Many people make visits to see this heritage. It is an important component to the waterways corridor.

Freight: cargoes include aggregates, oil products, grain, steel, construction materials, domestic waste and fuels. Waterborne freight is increasing. In 2008 tonnage was 16% up compared to 2004. Purely inland freight (excluding coastal movements) has gone up by 42% over 2004-2008 (2.6m tonnes to 3.7m tonnes). However, it remains at only 3% of total freight moved.

The natural environment: the inland waterways are increasingly recognised as providing a range of aquatic and bank side habitats, supporting biodiversity. Many species flourish and there are specific programmes encouraging, for example the return of otters, voles and rare butterflies.

Government studies show that there is greater potential for waterborne freight. More freight movements on the waterways offer climate change and congestion benefits. It emits 75% less COÂ˛ per tonne km than road haulage and uses less fuel â&#x20AC;&#x201C; one barge with 500 tonnes on board is the equivalent of 25 lorries with 25 tonnes, using far less fuel and taking all those traffic movements off the roads.

An Inland Waterways Conservancy Is Needed To Sustain These Benefits

A National Inland Waterways Conservancy Over 50 years ago IWA proposed that a National Inland Waterways Conservancy be created to operate and manage our navigable waterways. At the time that was a visionary objective. We believe its time has come. As the economic situation started to affect the health of public finances the previous administration began to rein back public spending. This led to the grant-in-aid for the publicly funded navigations managed by the publicly owned navigation authorities – British Waterways (BW) and the Environment Agency (EA) – not being sufficient for their waterways to be maintained properly. Both have been operating with a funding gap. BW began a debate about whether a long term sustainable future for its waterways was for it to move from the public to the third sector. The previous administration was attracted in principle and had decided to consider mutualisation as an option for BW. Since taking office the coalition Government has been reviewing options for the management of the waterways and it too is looking at the third sector for BW, consistent with its aims for civil society delivering public services as an integral part of the development of Big Society for Britain. It is also reflecting on inclusion of the EA waterways in that third sector model. IWA firmly believes that a third sector Inland Waterways Conservancy is a better vehicle for the waterways than the current public sector model, initially comprising the BW and EA navigations as a fundamental building block with the flexibility for the incorporation of other navigations as and when appropriate. A single not for profit organisation, with a governance structure which includes major national stakeholders at board level, and with local delivery units directed by representatives from local communities, would offer: • A strong focus on the core mission of running the waterways in the best interests of the community. • A simplification of the management of the waterways to the benefit of business and the public. • An ability to gauge and respond quickly to changing customer needs. • Better value through the economies of scale to be achieved through the creation of a single organisation, and a co-ordinated system with, for example, a single navigation licence. • The development of a national identity, like the National Trust, The National Parks, and the national museums – will increase usage, volunteering and charitable donations. The Way Forward This way forward, with the waterways operated by and within civil society, offers long term savings for the Exchequer. But no major navigational network in the world is self-financing. The Government has recognised that BW revenue from its property would be needed and has said that this would be charity locked. An ongoing public contribution would also be needed, to fund start up and to reflect the service delivering public benefits. That could be expected to taper over time as third sector economies and income develop. But even at the outset – if the money needed was what BW and EA need now to operate their waterways, it is less than the cost of building 4 miles of motorway. A small sum to move the waterways onto a stronger sustainable future within civil society.

About IWA The Inland Waterways Association (IWA) is a registered charity, founded in 1946, which advocates the conservation, use, maintenance, restoration and development of the inland waterways for public benefit. IWA has about 18,000 members whose interests include boating, towing path walking, industrial archaeology, nature conservation and many other activities associated with the inland waterways. Information provided by half of IWAâ&#x20AC;&#x2122;s corporate members with their own membership structures has revealed that they, in themselves, have a combined membership of over 60,000 in support of IWAâ&#x20AC;&#x2122;s voice. IWA works closely with navigation authorities, other waterway bodies, a wide range of national and local authorities, voluntary, private and public sector organisations. We campaign and lobby for support and encourage public participation in the inland waterways. IWA actively supports waterway restoration, and through its waterways restoration volunteering organisation, Waterway Recovery Group, organises and subsidises over 20 week-long waterway restoration holiday schemes for volunteers around the country each year, as well as conducting multiple work parties around the country on most weekends. These schemes allow young people to participate in the preservation and restoration of our heritage, and in doing so learn restoration and heritage skills. More than 500 miles of canals and navigable rivers have been re-opened to public use since the Association was founded in 1946. Currently another 1179 miles of derelict inland waterways are the subject of restoration plans. IWA is organised into 35 local branches covering geographical areas of the country, through which volunteers coordinate activities as diverse as policing planning applications likely to be detrimental to the waterway corridor, providing engineering expertise to local waterway societies and schemes, raising money for restoration schemes, and educating the public on the value and benefits of their local waterways.

THE INLAND WATERWAYS: NEED A CONSERVANCY

What Could an Inland Waterways Conservancy do for Your Community? Registered office: Island House, Moor Road, Chesham HP5 1WA Tel: 01494 783453 Web: www.waterways.org.uk The Inland Waterways Association is a non-profit distributing company limited by guarantee Registered in England No. 612245. Registered as a charity 212342. 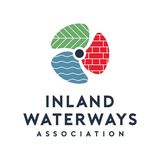