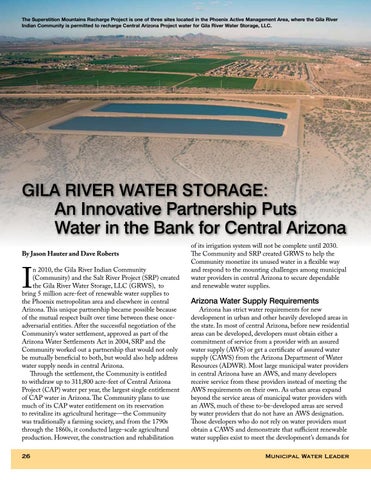 n 2010, the Gila River Indian Community (Community) and the Salt River Project (SRP) created the Gila River Water Storage, LLC (GRWS), to bring 5 million acre-feet of renewable water supplies to the Phoenix metropolitan area and elsewhere in central Arizona. This unique partnership became possible because of the mutual respect built over time between these onceadversarial entities. After the successful negotiation of the Community’s water settlement, approved as part of the Arizona Water Settlements Act in 2004, SRP and the Community worked out a partnership that would not only be mutually beneficial to both, but would also help address water supply needs in central Arizona. Through the settlement, the Community is entitled to withdraw up to 311,800 acre-feet of Central Arizona Project (CAP) water per year, the largest single entitlement of CAP water in Arizona. The Community plans to use much of its CAP water entitlement on its reservation to revitalize its agricultural heritage—the Community was traditionally a farming society, and from the 1790s through the 1860s, it conducted large-scale agricultural production. However, the construction and rehabilitation

of its irrigation system will not be complete until 2030. The Community and SRP created GRWS to help the Community monetize its unused water in a flexible way and respond to the mounting challenges among municipal water providers in central Arizona to secure dependable and renewable water supplies.

Arizona has strict water requirements for new development in urban and other heavily developed areas in the state. In most of central Arizona, before new residential areas can be developed, developers must obtain either a commitment of service from a provider with an assured water supply (AWS) or get a certificate of assured water supply (CAWS) from the Arizona Department of Water Resources (ADWR). Most large municipal water providers in central Arizona have an AWS, and many developers receive service from these providers instead of meeting the AWS requirements on their own. As urban areas expand beyond the service areas of municipal water providers with an AWS, much of these to-be-developed areas are served by water providers that do not have an AWS designation. Those developers who do not rely on water providers must obtain a CAWS and demonstrate that sufficient renewable water supplies exist to meet the development’s demands for Municipal Water Leader

Volume 2 Issue 2. We believe in the power of speaking directly with municipal water providers across the nation to get the answers that people want on topics like emerging technology, water law, and infrastructure. 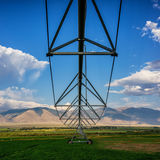