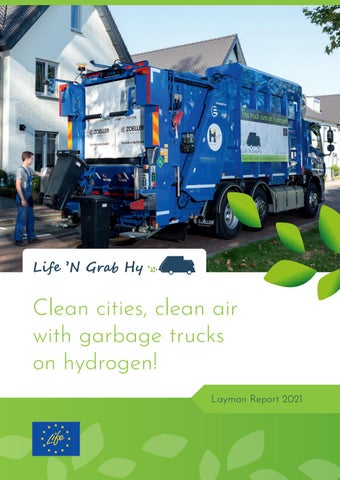 Life ‘N Grab Hy! What and why?

Garbage trucks are mainly operational in densely populated urban areas, in which there are strict criteria concerning emissions and environmental standards. There is an increasing need for zero emission solutions to comply with this upcoming access restrictions imposed by cities as part of air pollution reduction strategies.

Life ‘N Grab Hy!, short for ‘LIquidation of Full Emission and Noise by GARBage trucks with HYdrogen’ is a by Life funded European demonstration project. Two garbage trucks are converted to hydrogen and were demonstrated in different cities in the Netherlands and Germany (Eindhoven, Velhoven and Hürth, near Cologne).

Garbage trucks on hydrogen are a promising solution to meet this challenge.

E-Trucks Europe, built both hydrogen hybrid electric garbage trucks. The trucks are owned by waste collection companies Baetsen en Cure. Hydrogenics GmbH provided the integration of and services for the fuel cell. WaterstofNet coordinated the project and the demonstrations and was responsible for communication and dissemination.

They are zero emission, largely silent and and at the same time they provide the equivalent flexibility of diesel fuelled vehicles, as battery vehicles struggle to meet the range requirements. So garbage trucks on hydrogen are meeting the requirements of as well municipalities, waste collection institutions as the local residents. That’s why WaterstofNet, E-Trucks Europe, Baetsen Groep, Cure Afvalbeheer and Hydrogenics initiated the Life ‘N Grab Hy! project.

The Life ‘N Grab Hy! project was very useful for the project partners, as well as the partners involved in the demonstrations. They all gained a lot of experience and practical knowledge. All are taking the next steps in their contribution to a zero emission garbage collection in the future.

A garbage truck on hydrogen: how does it work? Fuel cells convert hydrogen and oxygen from the atmosphere, into electricity, heat and water vapour. The electricity is used to recharge the vehicles’ onboard batteries, which provide the electric motor with energy to drive and the compactor to compact waste. The concept ‘fuel cell as recharger of the batteries’ is defined as a ‘range extender’. Thanks to the compressed hydrogen, stored in the tanks, the trucks are fuelled within a few minutes. Advantages of a truck with hydrogen are a large driving range and large flexibility regarding operation. So, hydrogen fuelled trucks have comparable performances as a standard diesel truck. They only emit water vapour.

The garbage trucks on hydrogen: developed and built

Range (depending on operation mode)

Crucial to large scale implementation of the technology, is to fulfill a complete homologation process. Only homologated vehicles are allowed to operate throughout in Europe.

This process required quite a lot of time, but resulted in two homologated trucks on hydrogen, including the conformity to all specific European directives for waste collection vehicles. The homologation process of the trucks has several steps. First the complete vehicle assembly (chassis, compactor and driveline) was inspected visually, investigating the conformity and the use of only certified components. Secondly, the vehicle was subjected to an extensive road testing campaign on the Dutch Road Administration agencies test centre (RDW) in Lelystad, performing successful brake-testing, including automatic braking, evasive manoeuvring and functionality testing. Finally, EMC (Electro Magnetic Compatibility) performances have been tested.

Demonstration of the garbage truck on hydrogen in Eindhoven, Best and Son (the Netherlands) April 2019 – December 2020

The truck is owned by waste collection company Baetsen

Results The vehicle drove more than 23.000 kms during the 20 months of operation. It collected multiple waste fractions such as residual, biomass and PMD in the municipalities of Veldhoven, Best and Son in the South of the Netherlands. In total Baetsen operated the vehicle 213 days, in a regime of 4 out of 5 working days. Occasionally the trucks was also used for paper collection during weekends.

Refuelling: Throughout its lifetime in the project the vehicle refuelled 142 times. On average it refuelled 17 kilograms of hydrogen and this within 17 minutes1. The refuelling time of a hydrogen truck is therefore comparable to a conventional Diesel truck. The truck refuelled a total of 2434 kgs of hydrogen. This is the long year average, refuelling goes faster in winter than in summer.

Beside the green house gas emissions that were saved, the vehicle operated with lower noise. This remarkably bettered the working conditions of the drivers and the loaders. Both were really enthusiastic about the trucks. In the meanwhile the trucks also emitting less noise to the environment.

Tank to wheel emissions have been taken into account.

The truck is owned by waste collection company Cure

Results An existing operational vehicle of Cure of 15 years old was overhauled and converted to hydrogen. The idea was to extend the usage and add another lifecycle by giving it a second life and upgrade it to the latest state of the art of propulsion and emissions. Although giving the a vehicle a second life in a circular way, not needing to produce another truck and saving raw materials, was inspired by ethical intentions, some drawbacks appeared. For example, the vehicle was collecting waste in an inner city operation: low mileage, low average speeds and high demand on the lifting device and the compactor. This combined with the fact that side-loader compactors have a relatively high energy demand, also meant that the vehicle (state of the art design in 2015) was underpowered and also showed limitations in acceleration on 80kph roads.

Nevertheless, a lot of lessons have been learned. The vehicle drove 1.500 kms during the 20 months of operation. It collected multiple waste fractions such as residual, biomass, PMD in the inner city of Eindhoven in the South of the Netherlands. In total Cure operated the vehicle for 42 days, with an average route of 35 kms in a regime of 2 to 3 out of 5 working days.

Refuelling: The truck refuelled 270 kg of green hydrogen at the WaterstofNet refuelling station at the Automotive Campus in Helmond. It refuelled 20 times with an average of 14 kgs. This was in line with the prognosed 1 refuel per 2 operational days, showing similar refuelling times as their diesel equivalent of about 131 minutes. The electricity used for night-charging of the battery also comes from green-electricity contract. This means no CO2 or other Greenhouse gases have been emitted while operating the hydrogen electric hybrid vehicle during the Life ‘N Grab Hy! project. This is the long year average, refuelling goes faster in winter than in summer.

Comfort Beside the green house gas emissions that were saved, the vehicle operated with lower noise. This remarkably enhanced the physical working conditions of the drivers and the loaders. Both were enthusiastic about the truck, having a more comfortable ride due to less vibrations and low noise levels. At the same time the truck was emitting less noise to the environment, creating less environmental sound pollution.

The truck is owned by waste collection company Baetsen In january 2020 a 2 weeks demonstration of the garbage truck on hydrogen, owned by Baetsen, took place in the city of Hürth, a municipality south of Cologne. The Stadtwerke Hürth, that co-owns the hydrogen refuelling station on the Knapsack Industrial plant for buses, was very interested in starting a demonstration with a hydrogen garbage truck. After their experience with buses , they wanted to experience the potential of these trucks, because they are also responsible for the municipality’s waste collection. They want to contribute to a more environmentally friendly waste collection in the future.

Results During its 2 weeks operation of the hydrogen garbage truck covered 431 kms in the daily operation. It collected residual waste in mini containers, operating in a period of 8 operational days within the 14 days timeframe.

Refuelling: During the demonstration period the vehicle refueled a total of 98,19 kgs of hydrogen in 6 refuelling events.

Green house gases saved: During this short demonstration in the municipality of Hürth, the truck was able to reduce Green House Gas-Emissions1.

Tank to wheel emissions have been taken into account.

Comfort Beside the reduction of green house gas emissions, the vehicle operated with lower noise emissions (-4Db in comparison to a standard diesel operated vehicle), leading to better working conditions. The most noticeable and positive effect for the drivers and loaders working on the back of the waste collection vehicle, resulting from the interviews held with the people that operated the vehicle, was the lower noise level of the truck. They were more relax and less tired after a day’s work. Driver: “It’s more relax to drive this truck during a full day of operation,

although it is not a low-entry cabine”

Loader: “You really notice the difference in noise emissions and the tailpipe

emissions compared to our diesel operated truck, which are load and smell”. The general public also noticed and mentioned, that less noise was emitted to the surrounding environment by the truck passing by in the streets.

Conclusion Although the truck is not designed for the specific local conditions in Hurth (f.e. hills), it was a great opportunity for the organisation to learn more about hydrogen technology and to gain experience in driving this hydrogen garbage truck with low noise and zero-emissions. Stadtwerke Hürth sees a future for hydrogen in their fleet, especially when the truck (originally designed for flat area’s) will be adapted to the hilly local situation.

Start with new trucks or trucks not older than 5 years

The end users are in favour of the technology, but the costs of the vehicles and hydrogen have to be reduced

Drivers, loaders and public are very enthusiastic about the trucks. They offer better working conditions, because of the lower GHG and noise emissions they produce

255 days of operation in 5 cities (Veldhoven, Best and Son, Einhoven, Hürth) in 2 member states (the Netherlands and Germany)

a reduction of operational noise level with -4 Db(A)

The project Life ‘N Grab Hy! was the crucial chain in the introduction of garbage trucks on hydrogen in Europe. Especially the homologation and the test drives in real operation were key in the further roll out of this clean technology resulting in a better air quality in the cities. After the 2 Life ‘N Grab Hy! vehicles, now already more than 20 garbage trucks will start working in different European cities.

Thanks to the real life testing at the demonstration sites, we could optimise our system and accelerate our developments. Because of the increasing interest for our vehicles, we have build a new facility in order to be able to scale up our production significantly.

If it was up to me I would like to drive this truck until I retire, it’s so comfortable and silent! It was also really impressive that people from Japan are visiting Baetsen to see me driving a garbage truck, it make me realise how special it is of what we are doing in this project.

I’m really happy that I am one of the first drivers that can test this new technology. It works well!

We met a lot of technical, legislative and operational challenges. I am convinced that solving these issues was a necessary step in the futher roll out of this technology.

In the beginning I was the only one responsible for all technical developments at E-trucks Europe. At the moment I already have 5 colleague engineers, supporting the roll out of this clean technology.

The future More garbage trucks Thanks to the experiences of the Life ‘N Grab Hy! project, more garbage trucks will be operated and tested in Europe in the large scale demonstration projects Hector, Revive and H2RenT. More than 20 trucks are planned for the coming years, as you can see on this map.

Next steps The Life ‘N Grab Hy! project was very useful for the project partners, as well as the partners involved in the demonstrations. They all gained a lot of experience and practical knowledge. All are taking the next steps in their contribution to a zero emission garbage collection in the future.

In the Life and Grab Hy! projects 2 garbage trucks on hydrogen are built and demonstrated at several locations in Europe!