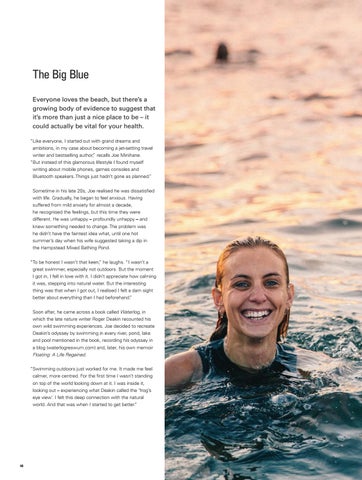 The Big Blue Everyone loves the beach, but there’s a growing body of evidence to suggest that it’s more than just a nice place to be – it could actually be vital for your health. “Like everyone, I started out with grand dreams and ambitions, in my case about becoming a jet-setting travel writer and bestselling author,” recalls Joe Minihane. “But instead of this glamorous lifestyle I found myself writing about mobile phones, games consoles and Bluetooth speakers. Things just hadn’t gone as planned.” Sometime in his late 20s, Joe realised he was dissatisfied with life. Gradually, he began to feel anxious. Having suffered from mild anxiety for almost a decade, he recognised the feelings, but this time they were different. He was unhappy – profoundly unhappy – and knew something needed to change. The problem was he didn’t have the faintest idea what, until one hot summer’s day when his wife suggested taking a dip in the Hampstead Mixed Bathing Pond. “To be honest I wasn’t that keen,” he laughs. “I wasn’t a great swimmer, especially not outdoors. But the moment I got in, I fell in love with it. I didn’t appreciate how calming it was, stepping into natural water. But the interesting thing was that when I got out, I realised I felt a darn sight better about everything than I had beforehand.” Soon after, he came across a book called Waterlog, in which the late nature writer Roger Deakin recounted his own wild swimming experiences. Joe decided to recreate Deakin’s odyssey by swimming in every river, pond, lake and pool mentioned in the book, recording his odyssey in a blog (waterlogreswum.com) and, later, his own memoir Floating: A Life Regained. “Swimming outdoors just worked for me. It made me feel calmer, more centred. For the first time I wasn’t standing on top of the world looking down at it. I was inside it, looking out – experiencing what Deakin called the ’frog’s eye view’. I felt this deep connection with the natural world. And that was when I started to get better.”

Hello, you’ve found our magazine - a printed and digital companion for anyone needing inspiration from Watergate Bay Hotel. You’ll find literature and features, stories from well-known faces and others you don't, a what’s what of Cornwall happenings, culture and travel as well as other leisurely pursuits. 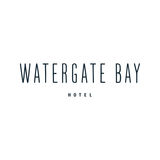