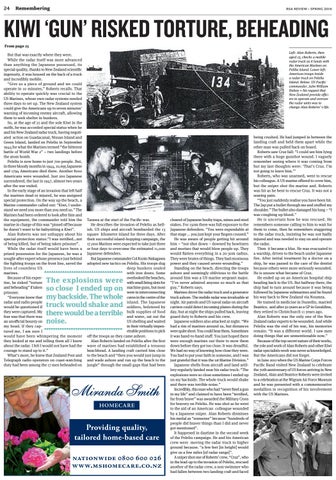 KIWI ‘GUN’ RISKED TORTURE, BEHEADING From page 23 But that was exactly where they were. While the radar itself was more advanced than anything the Japanese possessed, its special quality, thanks to New Zealand scientific ingenuity, it was housed on the back of a truck and incredibly mobile. “Give us a piece of ground and we could operate in 10 minutes,” Roberts recalls. That ability to operate quickly was crucial to the US Marines, whose own radar systems needed three days to set up. The New Zealand system could give the Americans up to seven minutes’ warning of incoming enemy aircraft, allowing them to seek shelter in bunkers. So, at the age of 22 and the sole Kiwi in the outfit, he was accorded special status when he and his New Zealand radar truck, having negotiated action on Guadacanal, Nissan Island and Green Island, landed on Peleliu in September 1944 for what the Marines termed “the bitterest battle of World War 2” – two landings before the atom bomb. Peleliu is now home to just 700 people. But, in three bloody months in 1944, 10,695 Japanese and 1794 Americans died there. Another 8010 Americans were wounded. Just 200 Japanese surrendered, the last in 1947, almost two years after the war ended. In the early stage of an invasion that left half the marines dead or injured, he was assigned special protection. On the way up the beach, a Marine commander called out: “Kiwi, I understand we need you more than you need us.” The Marines had been ordered to look after him and the equipment, the commander told him the marine in charge of this was “pissed off because he doesn’t want to be babysitting a Kiwi”. Alan Roberts was not unhappy about his special-protection status:“I was terrified…not of being killed, but of being taken prisoner”. While the radar itself would have been a prized possession for the Japanese, he was a sought-after expert whose presence just behind the fighting troops on the front line, saved the lives of countless US marines. Because of his expertise, he risked “torture and beheading” if taken prisoner. “Everyone knew that radar and radio people would be questioned if they were captured. My fear was that there was an unofficial bounty on my head. If they captured me, I am sure I would have been whimpering the moment they looked at me and telling them all I knew about the radar. I felt I would not have had the courage to stand up to it.” What’s more, he knew that Zealand Post and Telegraph radio operators on coast-watching duty had been among the 17 men beheaded on

Left: Alan Roberts, then aged 23, checks a mobile radar truck as it lands with the American Marines on Peliliu Island. Lower left: American troops inside a radar truck on Peleliu Island. Below: US Pacific commander, Adm William Halsey – his request that New Zealand provide officers to operate and oversee the radar units was to change Alan Roberts’ s life.

Tarawa at the start of the Pacific war. He describes the invasion of Peleliu as hellish. US ships and aircraft bombarded the 13 square kilometre island for three days. After their successful island-hopping campaign, the 17,000 Marines were expected to take just three or four days to overcome the estimated 11,000 Japanese defenders. But Japanese commander Col Kunio Nakagawa adopted new tactics on Peleliu. His troops dug deep bunkers sealed with iron doors. Some overlooked the beaches, with small firing slots for machine guns, but most were in interconnecting caves in the centre of the island. The Japanese soldiers, bolstered by bulk supplies of food and water, sat out the US shelling and waited in their virtually impenetrable positions to pick off the troops as they came ashore. Alan Roberts landed on Peleliu after the first wave of marines had established a tenuous beachhead. A landing craft carried him close to the beach and “then you would just jump in and wade ashore and run up the beach to the jungle” through the small gaps that had been

The explosions were so close I ended up on my backside. The whole truck would shake and there would be a terrible noise.

cleared of Japanese booby traps, mines and steel stakes. For 150m there was full exposure to the Japanese defenders. “You were expendable at that stage … you just kept your fingers crossed.” He was aware of people getting hit around him – “not shot down – downed by howitzers and mortars that would blow people up. They would flatten everything in a 20-30m radius. They were brutes of things. They had enormous power and they caused severe wounding.” Standing on the beach, directing the troops ashore and seemingly oblivious to the battle around him was a US marine sergeant major. “I’ve never admired anyone so much as that guy,” Roberts says. Marines drove the radar truck and a generator truck ashore. The mobile radar was invaluable at night. Air patrols and US naval radar on aircraft carriers could detect incoming planes during the day, but at night the ships pulled back, leaving guard duty to Roberts and his crew. Japanese soldiers also attacked at night. “We had a rim of marines around us, but distances were quite short. You could hear them. Sometimes it was hand-to-hand stuff. You just hoped there were enough marines out there to mow them down before they got too close. It was dreadful. We had no way of knowing how close they were. You had to put your faith in someone, and I was just grateful that it was the 1st Marine Division.” Japanese shells from aircraft and land artillery regularly landed near his radar truck: “The explosions were so close sometimes I ended up on my backside. The whole truck would shake and there was terrible noise.” Incredibly, this man who had “never fired a gun in my life” and claimed to have been “terrified, far from brave” was awarded the Military Cross for bravery on Peleliu. He was shot as he went to the aid of an American colleague wounded by a Japanese sniper. Alan Roberts dismisses his medal as “nonsense” because “hundreds of people did braver things than I did and never got mentioned”. It happened in daytime in the second week of the Peleliu campaign. He and his American crew were moving the radar truck to higher ground because. “a few feet [in height] would give us a few miles [of radar range]”. A sniper shot one of Roberts’ crew, “Cruz”, who in the lead-up to the invasion of Peleliu, rescued another of the radar crew, a non-swimmer who had fallen between two landing craft and faced

being crushed. He had jumped in between the landing craft and held them apart while the other man was pulled back on board. Roberts saw Cruz fall: “I could see him lying there with a huge gunshot wound. I vaguely remember seeing where it was coming from but my last thoughts were: ‘That’s Cruz. I’m not going to leave him.’” Roberts, who was unarmed, went to rescue his colleague. A US marine offered to cover him, but the sniper shot the marine and. Roberts was hit as he bent to rescue Cruz. It was not a searing pain. “You just suddenly realise you have been hit. The Jap put a bullet through me and stuffed my shoulder.” The bullet also damaged his lung – “I was coughing up blood.” He is uncertain how he was rescued. He remembers someone calling to him to wait for them to come, then he remembers staggering to the radar truck, insisting he was not badly injured and was needed to stay on and operate the radar. Then it became a blur. He was evacuated to a warship, driven to the beach under Japanese fire. After initial treatment by a doctor on a ship, he was passed to the care of the dentist because others were more seriously wounded. He is unsure what became of Cruz. He ended up on an American hospital ship heading back to the US. But halfway there, the ship had to turn around because it was being followed by Japanese submarines and he found his way back to New Zealand via Noumea. He trained in medicine in Dunedin, married Beatrice, and after 50 years as a GP in Geraldine, they retired to Christchurch 11 years ago. Alan Roberts was the only one of the New Zealand radar experts to be wounded. And while Peleliu was the end of his war, his memories remain: “It was a different world. I saw men doing things that are unmentionable now.” Because of the top-secret nature of their works, the role and work of Alan Roberts and other Kiwi radar specialists work was never acknowledged. But the Americans did not forget. in June 2012 when the US Marine Corps Forces Pacific Band visited New Zealand to celebrate the 70th anniversary of US forces arriving in New Zealand, Alan and Beatrice Roberts were invited to a celebration at the Wigram Air Force Museum and he was presented with a commemorative medallion in recognition of his involvement with the US Marines.