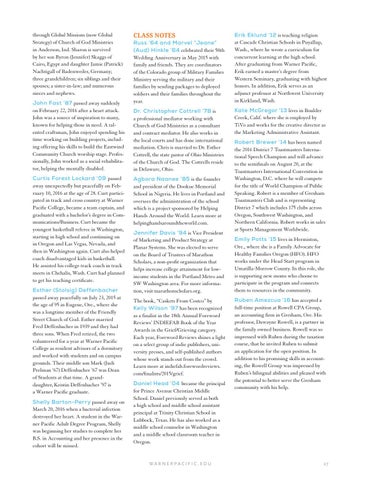 through Global Missions (now Global Strategy) of Church of God Ministries in Anderson, Ind. Sharon is survived by her son Byron (Jennifer) Skaggs of Cairo, Egypt and daughter Jamie (Patrick) Nachtigall of Badenweiler, Germany; three grandchildren; six siblings and their spouses; a sister-in-law; and numerous nieces and nephews. John Fast ’87 passed away suddenly on February 22, 2016 after a heart attack. John was a source of inspiration to many, known for helping those in need. A talented craftsman, John enjoyed spending his time working on building projects, including offering his skills to build the Eastwind Community Church worship stage. Professionally, John worked as a social rehabilitator, helping the mentally disabled. Curtis Forest Lockard ’09 passed away unexpectedly but peacefully on February 10, 2016 at the age of 28. Curt participated in track and cross country at Warner Pacific College, became a team captain, and graduated with a bachelor’s degree in Communications/Business. Curt became the youngest basketball referee in Washington, starting in high school and continuing on in Oregon and Las Vegas, Nevada, and then in Washington again. Curt also helped coach disadvantaged kids in basketball. He assisted his college track coach in track meets in Chehalis, Wash. Curt had planned to get his teaching certificate. Esther (Stolsig) Deffenbacher passed away peacefully on July 23, 2015 at the age of 95 in Eugene, Ore., where she was a longtime member of the Friendly Street Church of God. Esther married Fred Deffenbacher in 1939 and they had three sons. When Fred retired, the two volunteered for a year at Warner Pacific College as resident advisors of a dormitory and worked with students and on campus grounds. Their middle son Mark (Judi Peelman ‘67) Deffenbacher ’67 was Dean of Students at that time. A granddaughter, Kristin Deffenbacher ’97 is a Warner Pacific graduate. Shelly Barton-Perry passed away on March 20, 2016 when a bacterial infection destroyed her heart. A student in the Warner Pacific Adult Degree Program, Shelly was beginning her studies to complete her B.S. in Accounting and her presence in the cohort will be missed.

CLASS NOTES Russ ’64 and Marvel “Jeane” (Aud) Hinkle ’64 celebrated their 50th Wedding Anniversary in May 2015 with family and friends. They are coordinators of the Colorado group of Military Families Ministry serving the military and their families by sending packages to deployed soldiers and their families throughout the year. Dr. Christopher Cottrell ’78 is a professional mediator working with Church of God Ministries as a consultant and contract mediator. He also works in the local courts and has done international mediation. Chris is married to Dr. Esther Cottrell, the state pastor of Ohio Ministries of the Church of God. The Cottrells reside in Delaware, Ohio. Agbora Naanee ’85 is the founder and president of the Dookue Memorial School in Nigeria. He lives in Portland and oversees the administration of the school which is a project sponsored by Helping Hands Around the World. Learn more at helpinghandsaroundtheworld.com. Jennifer Davis ’94 is Vice President of Marketing and Product Strategy at Planar Systems. She was elected to serve on the Board of Trustees of Marathon Scholars, a non-profit organization that helps increase college attainment for lowincome students in the Portland Metro and SW Washington area. For more information, visit marathonscholars.org. The book, “Caskets From Costco” by Kelly Wilson ’97 has been recognized as a finalist in the 18th Annual Foreword Reviews’ INDIEFAB Book of the Year Awards in the Grief/Grieving category. Each year, Foreword Reviews shines a light on a select group of indie publishers, university presses, and self-published authors whose work stands out from the crowd. Learn more at indiefab.forewordreviews. com/finalists/2015/grief. Daniel Head ’04 became the principal for Prince Avenue Christian Middle School. Daniel previously served as both a high school and middle school assistant principal at Trinity Christian School in Lubbock, Texas. He has also worked as a middle school counselor in Washington and a middle school classroom teacher in Oregon.

Erik Eklund ’12 is teaching religion at Cascade Christian Schools in Puyallup, Wash., where he wrote a curriculum for concurrent learning at the high school. After graduating from Warner Pacific, Erik earned a master’s degree from Western Seminary, graduating with highest honors. In addition, Erik serves as an adjunct professor at Northwest University in Kirkland, Wash. Kate McGregor ’13 lives in Boulder Creek, Calif. where she is employed by TiVo and works for the creative director as the Marketing Administrative Assistant. Robert Brewer ’14 has been named the 2016 District 7 Toastmasters International Speech Champion and will advance to the semifinals on August 20, at the Toastmasters International Convention in Washington, D.C. where he will compete for the title of World Champion of Public Speaking. Robert is a member of Gresham Toastmasters Club and is representing District 7 which includes 175 clubs across Oregon, Southwest Washington, and Northern California. Robert works in sales at Sports Management Worldwide. Emily Potts ’15 lives in Hermiston, Ore., where she is a Family Advocate for Healthy Families Oregon (HFO). HFO works under the Head Start program in Umatilla-Morrow County. In this role, she is supporting new moms who choose to participate in the program and connects them to resources in the community. Ruben Amezcua ’16 has accepted a full-time position at Rowell CPA Group, an accounting firm in Gresham, Ore. His professor, Dawayne Rowell, is a partner in the family owned business. Rowell was so impressed with Ruben during the taxation course, that he invited Ruben to submit an application for the open position. In addition to his promising skills in accounting, the Rowell Group was impressed by Ruben’s bilingual abilities and pleased with the potential to better serve the Gresham community with his help. 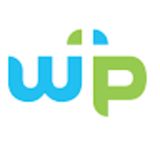