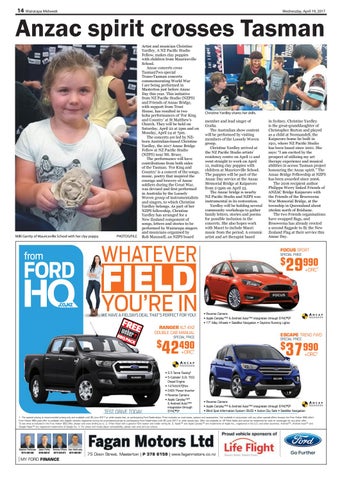 Milli Garrity of Mauriceville School with her clay poppy.

Artist and musician Christine Yardley, A NZ Pacific Studio Fellow, makes clay poppies with children from Mauriceville School. Anzac concerts cross TasmanTwo special Trans-Tasman concerts commemorating World War I are being performed in Masterton just before Anzac Day this year. This initiative from NZ Pacific Studio (NZPS) and Friends of Anzac Bridge, with support from Trust House, has resulted in two koha performances of ‘For King and Country’ at St Matthew’s Church. They will be held on Saturday, April 22 at 2pm and on Monday, April 24 at 7pm. The concerts are led by NZborn Australian-based Christine Yardley, the 2017 Anzac Bridge Fellow at NZ Pacific Studio (NZPS) near Mt. Bruce. The performance will have contributions from both sides of the Tasman. ‘For King and Country’ is a concert of the songs, music, poetry that inspired the courage and bravery of Anzac soldiers during the Great War, was devised and first performed in Australia by the Loosely Woven group of instrumentalists and singers, to which Christine Yardley belongs. As part of her NZPS fellowship, Christine Yardley has arranged for a New Zealand component of songs, letters and stories to be performed by Wairarapa singers and musicians organised by Rob Maunsell, an NZPS board

member and lead singer of Grafia. The Australian show content will be performed by visiting members of the Loosely Woven group. Christine Yardley arrived at the NZ Pacific Studio artists’ residency centre on April 11 and went straight to work on April 12, making clay poppies with children at Mauriceville School. The poppies will be part of the Anzac Day service at the Anzac Memorial Bridge at Kaiparoro from 2-3pm on April 25. The Anzac bridge is nearby NZ Pacific Studio and NZPS was instrumental in its restoration. Yardley will be holding several community workshops to gather family letters, stories and poems for possible inclusion in the concerts. She also hopes work with Maori to include Maori music from the period. A ceramic artist and art therapist based

in Sydney, Christine Yardley is the great-granddaughter of Christopher Burton and played as a child at Normandell, the Kaiparoro home he built in 1911, where NZ Pacific Studio has been based since 2001. She says: “I am excited by the prospect of utilising my art therapy experience and musical abilities in across Tasman project honouring the Anzac spirit.” The Anzac Bridge Fellowship at NZPS has been awarded since 2006. The 2016 recipient author Philippa Werry linked Friends of ANZAC Bridge Kaiparoro with the Friends of the Brooweena War Memorial Bridge, at the township in Queensland about 260km north of Brisbane. The two Friends organisations have swapped flags, and Brooweena has already erected a second flagpole to fly the New Zealand Flag at their service this Anzac Day.

1. The special pricing is recommended pricing only and available until 30 June 2017 or while stocks last, at participating Ford Dealerships. Price excludes on road costs, options and accessories. Not available in conjunction with any other special offers (except the Free Weber BBQ offer). Free Weber BBQ pack offer is available with eligible vehicles registered during the promotional period at participating Ford Dealerships until 30 June 2017 or while stocks last. Offer not available on VIP Fleet Sales and cannot be redeemed for cash or exchanged for any other offer. To see what is included in the Free Weber BBQ offer, please visit www.fordhq.co.nz. 2. When fitted with a genuine Ford towbar and trailer wiring kit. 3. Apple™ and Apple Carplay™ are trademarks of Apple Inc., registered in the U.S. and other countries. Android™, Android Auto™ and Google Maps™ are registered trademarks of Google Inc. 4. For phone and media player compatibility, please visit www.ford.co.nz/sync. 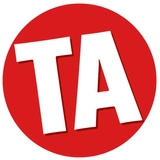