A Brief Description of St John the Baptist, Wadworth 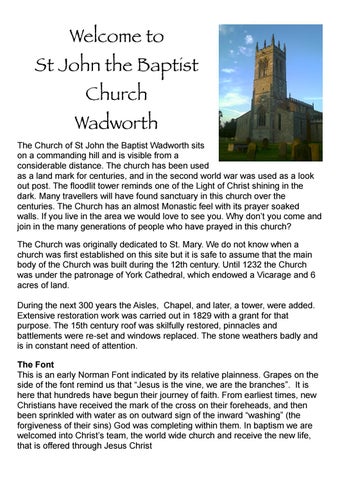 Wadworth The Church of St John the Baptist Wadworth sits on a commanding hill and is visible from a considerable distance. The church has been used as a land mark for centuries, and in the second world war was used as a look out post. The floodlit tower reminds one of the Light of Christ shining in the dark. Many travellers will have found sanctuary in this church over the centuries. The Church has an almost Monastic feel with its prayer soaked walls. If you live in the area we would love to see you. Why don’t you come and join in the many generations of people who have prayed in this church? The Church was originally dedicated to St. Mary. We do not know when a church was first established on this site but it is safe to assume that the main body of the Church was built during the 12th century. Until 1232 the Church was under the patronage of York Cathedral, which endowed a Vicarage and 6 acres of land. During the next 300 years the Aisles, Chapel, and later, a tower, were added. Extensive restoration work was carried out in 1829 with a grant for that purpose. The 15th century roof was skilfully restored, pinnacles and battlements were re-set and windows replaced. The stone weathers badly and is in constant need of attention. The Font This is an early Norman Font indicated by its relative plainness. Grapes on the side of the font remind us that “Jesus is the vine, we are the branches”. It is here that hundreds have begun their journey of faith. From earliest times, new Christians have received the mark of the cross on their foreheads, and then been sprinkled with water as on outward sign of the inward “washing” (the forgiveness of their sins) God was completing within them. In baptism we are welcomed into Christ’s team, the world wide church and receive the new life, that is offered through Jesus Christ

South door entrance (1) Has a 15th century front and on each side of the porch inside are 13th century arches. The stone column was almost eroded through and was replaced in 1982 and the porch was re-pointed inside and out. There is also a wooden funeral bier from the early 20th century. Blind Arcades (2) The blind arcades are a most interesting feature. Its east-most (left) bay has a trefoil-headed Piscina (stone wash-basin). These are of the late Norman period. Chapel (3) In the South wall are the Piscina and the three Sedilia stone seats dating from the 14th century. The two on the South (right) side are 13th century, decorated with an intricate design of whirls, flourishes, trefoils and ogees. The East Window is of the late Perpendicular style and has three distinct mullions with a crosspiece joining all three, which is very unusual. One of the windows depicts the thanksgiving of Christ in the temple, where the old Priest Simeon declares, that the child (Jesus) will be “a light for revelation to the Gentiles and for glory to your people Israel.” Today we believe that Christ is the light of the world a light no darkness can quench. Large free-standing tomb (4) Is inscribed in Latin, which roughly translated reads: &quot;Here lies Edmund Fitzwilliam, Esquire, who died on the 24th December A.D. 1465. God have mercy on his soul. Here lies Katherine, his wife, daughter of John Clifton, Knight, who died on 14th March 1435. God have mercy on her soul. Be witness, 0 Christ, that this stone lies here not to adorn the body but to commemorate the spirit.” This Edmund is the son of the Edmund Fitzwilliam, commemorated by the alabaster tomb under the Chancel Arch at the side of the Chapel. The Fitzwilliam Arms are set in each corner of the free-standing tomb. They are also to be found on the four projecting stone roof-supports, known as corbals, in the north aisle of the Church. Fitzwilliam tomb (5) Under the South Arch of the Chancel is a fine alabaster tomb of a knight and his lady. This commemorates Edmund Fitzwilliam who died in 1430 and his wife Maud. The head and shoulders of the knight rest upon his great helm and he is wearing complete plate-armour as worn at the Battle of Agincourt.

Vestry Door (6) The low door to the Vestry has its original ironwork and is 15th century. Can you spot the carved figure half way down the door. What do you think it is? Rounded Pillars (7) Note that the stone pillars on the near north side are rounded and have carved end-capitals, in the Norman style of architecture. Note the remnants of paint visible on the pillar by the pulpit. Those on the South side are later 14th century octagonal pillars. Double semi-effigial figure (8) Beneath the large 15th century window in the West wall is an interesting Medieval ledger (tomb) stone with a double semi-effigial figure, pinned to the wall. This was brought in from the Churchyard in 1977. Huntsman (9) Close to the font, is the 14th century figure of a huntsman, with a sword hanging from his girdle, a hunting horn, and a faithful dog at his feet. In his book on South Yorkshire, this stone effigy may be connected with Thomas de Chaworth who held &quot;one third of a knight&#39;s fee&quot; at Wadworth, and whose family were Nottinghamshire land-owners. Parish Chest (10) On top of the toilet is an ancient Parish Chest. The lid and back are older than the Jacobean front and ends which are carved with swirls and dolphins. Its three locks were a form of combination lock. Each Church-warden and the

Vicar held a key so that all three had to be present in order to open it. The Tower The tower dates from the 15th century and there are traces of two chambers which were once attached to the upper parts of the North and South sides. There are four bells in the tower top chamber. In 1898 a clock was placed in the first floor chamber of the Tower to celebrate the Diamond Jubilee of Queen Victoria. In 1965, to celebrate the Silver Jubilee of Queen Elizabeth 11, the Parish Council gave an electric timepiece to by-pass the original weight-driven works and connected it to the hands of the existing dials. The original weights are in the south entrance (1) on top of funeral bier. There are some candles by the side of the weights and some prayer cards if you would like to light a candle or say a prayer. Prayer is a central part of the church’s life. We believe it involves listening to God as well as talking to him: more a conversation, more of a meeting then a message board. In our services we use prayers written by others, prayers in our own words and sometimes silence. Our central aim is to allow God to pray “in and through us: to align our hearts with his. Mother Theresa wrote: “love to pray … prayer enlarges the heart until it is capable of containing God’s gift to himself” Wadworth War Memorial stands outside the East end of the Church and commemorates 15 men from the old Wadworth Parish who died in the two World Wars 1914-1918 and 1939-1945. Lest we forget. Hope you have enjoyed looking around this church, please sign our visitors book. May the road rise up to meet you.  May the wind be always at your back.  May the sun shine warm upon your face;  the rains fall soft upon your fields and may God hold you in the palm of His hand. Text: R Redden, B Birch and A Price, See www.blwchurch.com for service times Revd Alun Price The Vicarage, Vicarage Drive

A Brief Description of St John the Baptist, Wadworth

A guide to this beautiful church highlighting important features