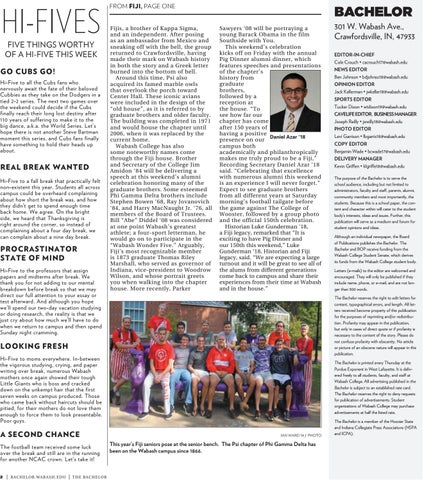 HI-FIVES FIVE THINGS WORTHY OF A HI-FIVE THIS WEEK

GO CUBS GO! Hi-Five to all the Cubs fans who nervously await the fate of their beloved Cubbies as they take on the Dodgers in a tied 2-2 series. The next two games over the weekend could decide if the Cubs finally reach their long lost destiny after 110 years of suffering to make it to the big dance, a.k.a. the World Series. Let’s hope there is not another Steve Bartman moment this series, and Cubs fans finally have something to hold their heads up about.

REAL BREAK WANTED Hi-Five to a fall break that practically felt non-existent this year. Students all across campus could be overheard complaining about how short the break was, and how they didn’t get to spend enough time back home. We agree. On the bright side, we heard that Thanksgiving is right around the corner, so instead of complaining about a four day break, we can complain about a nine day break.

PROCRASTINATOR STATE OF MIND Hi-Five to the professors that assign papers and midterms after break. We thank you for not adding to our mental breakdown before break so that we may direct our full attention to your essay or test afterward. And although you hope we’ll spend our two-day vacation studying or doing research, the reality is that we just cry about how much we’ll have to do when we return to campus and then spend Sunday night cramming.

FROM FIJI, PAGE ONE Fijis, a brother of Kappa Sigma, and an independent. After posing as an ambassador from Mexico and sneaking off with the bell, the group returned to Crawfordsville, having made their mark on Wabash history in both the story and a Greek letter burned into the bottom of bell. Around this time, Psi also acquired its famed marble owls that overlook the porch toward Center Hall. These iconic avians were included in the design of the “old house”, as it is referred to by graduate brothers and older faculty. The building was completed in 1971 and would house the chapter until 2006, when it was replaced by the current home. Wabash College has also some noteworthy names come through the Fiji house. Brother and Secretary of the College Jim Amidon ‘84 will be delivering a speech at this weekend’s alumni celebration honoring many of the graduate brothers. Some esteemed Phi Gamma Delta brothers include Stephen Bowen ‘68, Ray Jovanovich ‘84, and Harry MacNaught Jr. ‘76, all members of the Board of Trustees. Bill “Abe” Diddel ‘08 was considered at one point Wabash’s greatest athlete; a four-sport letterman, he would go on to participate in the “Wabash Wonder Five.” Arguably, Fiji’s most recognizable member is 1873 graduate Thomas Riley Marshall, who served as governor of Indiana, vice-president to Woodrow Wilson, and whose portrait greets you when walking into the chapter house. More recently, Parker

BACHELOR Sawyers ‘08 will be portraying a young Barack Obama in the film Southside with You. This weekend’s celebration kicks off on Friday with the annual Pig Dinner alumni dinner, which features speeches and presentations of the chapter’s history from graduate brothers, followed by a reception at the house. “To see how far our chapter has come after 150 years of having a positive Daniel Azar ‘18 presence on our campus both academically and philanthropically makes me truly proud to be a Fiji,” Recording Secretary Daniel Azar ‘18 said. “Celebrating that excellence with numerous alumni this weekend is an experience I will never forget.” Expect to see graduate brothers from all different years at Saturday morning’s football tailgate before the game against The College of Wooster, followed by a group photo and the official 150th celebration. Historian Luke Gunderman ‘18, a Fiji legacy, remarked that “It is exciting to have Pig Dinner and our 150th this weekend,” Luke Gunderman ‘18, Historian and Fiji legacy, said. “We are expecting a large turnout and it will be great to see all of the alums from different generations come back to campus and share their experiences from their time at Wabash and in the house.”

Hi-Five to moms everywhere. In-between the vigorous studying, crying, and paper writing over break, numerous Wabash mothers once again showed their tough Little Giants who is boss and cracked down on the unkempt hair that the first seven weeks on campus produced. Those who came back without haircuts should be pitied, for their mothers do not love them enough to force them to look presentable. Poor guys.

The football team received some luck over the break and still are in the running for another NCAC crown. Let’s take it! 2

EDITOR-IN-CHIEF Cole Crouch • cacrouch17@wabash.edu NEWS EDITOR Ben Johnson • bdjohnso18@wabash.edu OPINION EDITOR Jack Kellerman • jwkeller18@wabash.edu SPORTS EDITOR Tucker Dixon • wtdixon19@wabash.edu CAVELIFE EDITOR, BUSINESS MANAGER Joseph Reilly • jsreilly18@wabash.edu PHOTO EDITOR Levi Garrison • lbgarris18@wabash.edu COPY EDITOR Benjamin Wade • bcwade17@wabash.edu DELIVERY MANAGER Kevin Griffen • klgriffe18@wabash.edu The purpose of the Bachelor is to serve the school audience, including but not limited to administrators, faculty and staff, parents, alumni, community members and most importantly, the students. Because this is a school paper, the content and character within will cater to the student body’s interests, ideas and issues. Further, this publication will serve as a medium and forum for student opinions and ideas. Although an individual newspaper, the Board of Publications publishes the Bachelor. The Bachelor and BOP receive funding from the Wabash College Student Senate, which derives its funds from the Wabash College student body. Letters (e-mails) to the editor are welcomed and encouraged. They will only be published if they include name, phone, or e-mail, and are not longer than 300 words.

The Bachelor reserves the right to edit letters for content, typographical errors, and length. All letters received become property of this publication for the purposes of reprinting and/or redistribution. Profanity may appear in the publication, but only in cases of direct quote or if profanity is necessary to the content of the story. Please do not confuse profanity with obscenity. No article or picture of an obscene nature will appear in this publication.

This year’s Fiji seniors pose at the senior bench. The Psi chapter of Phi Gamma Delta has been on the Wabash campus since 1866.

The Bachelor is a member of the Hoosier State and Indiana Collegiate Press Associations (HSPA and ICPA). 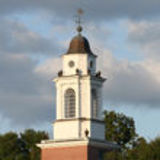