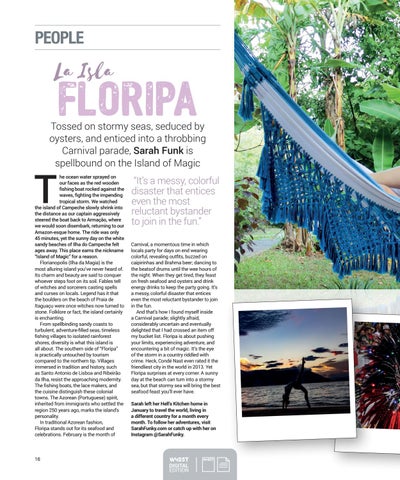 Tossed on stormy seas, seduced by oysters, and enticed into a throbbing Carnival parade, Sarah Funk is spellbound on the Island of Magic

he ocean water sprayed on our faces as the red wooden fishing boat rocked against the waves, fighting the impending tropical storm. We watched the island of Campeche slowly shrink into the distance as our captain aggressively steered the boat back to Armação, where we would soon disembark, returning to our Amazon-esque home. The ride was only 45 minutes, yet the sunny day on the white sandy beaches of Ilha do Campeche felt ages away. This place earns the nickname “Island of Magic” for a reason. Florianopolis (Ilha da Magia) is the most alluring island you’ve never heard of. Its charm and beauty are said to conquer whoever steps foot on its soil. Fables tell of witches and sorcerers casting spells and curses on locals. Legend has it that the boulders on the beach of Praia de Itaguaçu were once witches now turned to stone. Folklore or fact, the island certainly is enchanting. From spellbinding sandy coasts to turbulent, adventure-filled seas, timeless fishing villages to isolated rainforest shores, diversity is what this island is all about. The southern side of “Floripa” is practically untouched by tourism compared to the northern tip. Villages immersed in tradition and history, such as Santo Antonio de Lisboa and Ribeirão da Ilha, resist the approaching modernity. The fishing boats, the lace makers, and the cuisine distinguish these colonial towns. The Azorean (Portuguese) spirit, inherited from immigrants who settled the region 250 years ago, marks the island’s personality. In traditional Azorean fashion, Floripa stands out for its seafood and celebrations. February is the month of

Inside the travel special: Daytripping, weekending, adventure and romance in Costa Rica, volunteering in Sri Lanka, joining Carnival in Braz...

Inside the travel special: Daytripping, weekending, adventure and romance in Costa Rica, volunteering in Sri Lanka, joining Carnival in Braz...