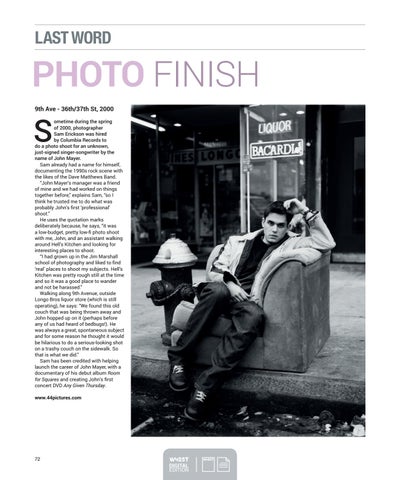 ometime during the spring of 2000, photographer Sam Erickson was hired by Columbia Records to do a photo shoot for an unknown, just-signed singer-songwriter by the name of John Mayer. Sam already had a name for himself, documenting the 1990s rock scene with the likes of the Dave Matthews Band. “John Mayer’s manager was a friend of mine and we had worked on things together before,” explains Sam, “so I think he trusted me to do what was probably John’s first ‘professional’ shoot.” He uses the quotation marks deliberately because, he says, “it was a low-budget, pretty low-fi photo shoot with me, John, and an assistant walking around Hell’s Kitchen and looking for interesting places to shoot. “I had grown up in the Jim Marshall school of photography and liked to find ‘real’ places to shoot my subjects. Hell’s Kitchen was pretty rough still at the time and so it was a good place to wander and not be harassed.” Walking along 9th Avenue, outside Longo Bros liquor store (which is still operating), he says: “We found this old couch that was being thrown away and John hopped up on it (perhaps before any of us had heard of bedbugs!). He was always a great, spontaneous subject and for some reason he thought it would be hilarious to do a serious-looking shot on a trashy couch on the sidewalk. So that is what we did.” Sam has been credited with helping launch the career of John Mayer, with a documentary of his debut album Room for Squares and creating John’s first concert DVD Any Given Thursday. www.44pictures.com