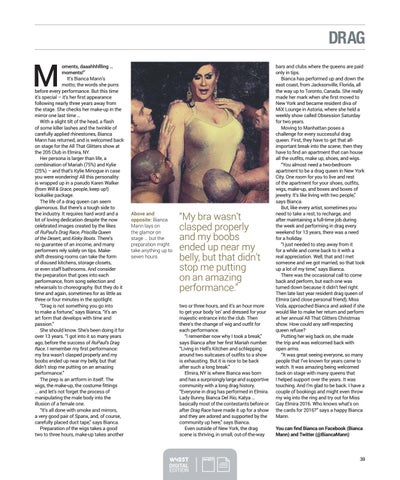 oments, daaahhhllling … moments!” It’s Bianca Mann’s motto; the words she purrs before every performance. But this time it’s special – it’s her first appearance following nearly three years away from the stage. She checks her make-up in the mirror one last time … With a slight tilt of the head, a flash of some killer lashes and the twinkle of carefully applied rhinestones, Bianca Mann has returned, and is welcomed back on stage for the All That Glitters show at the 205 Club in Elmira, NY. Her persona is larger than life, a combination of Mariah (75%) and Kylie (25%) – and that’s Kylie Minogue in case you were wondering! All this personality is wrapped up in a pseudo Karen Walker (from Will & Grace, people, keep up!) lookalike package. The life of a drag queen can seem glamorous. But there’s a tough side to the industry. It requires hard word and a lot of loving dedication despite the now celebrated images created by the likes of RuPaul’s Drag Race, Priscilla Queen of the Desert, and Kinky Boots. There’s no guarantee of an income, and many performers rely solely on tips. Makeshift dressing rooms can take the form of disused kitchens, storage closets, or even staff bathrooms. And consider the preparation that goes into each performance, from song selection and rehearsals to choreography. But they do it time and again, sometimes for as little as three or four minutes in the spotlight. “Drag is not something you go into to make a fortune,” says Bianca, “it’s an art form that develops with time and passion.” She should know. She’s been doing it for over 13 years. “I got into it so many years ago, before the success of RuPaul’s Drag Race. I remember my first performance: my bra wasn’t clasped properly and my boobs ended up near my belly, but that didn’t stop me putting on an amazing performance.” The prep is an artform in itself. The wigs, the make-up, the costume fittings … and let’s not forget the process of manipulating the male body into the illusion of a female one. “It’s all done with smoke and mirrors, a very good pair of Spanx, and, of course, carefully placed duct tape,” says Bianca. Preparation of the wigs takes a good two to three hours, make-up takes another

Above and opposite: Bianca Mann lays on the glamor on stage ... but the preparation might take anything up to seven hours.

“My bra wasn’t clasped properly and my boobs ended up near my belly, but that didn’t stop me putting on an amazing performance.” two or three hours, and it’s an hour more to get your body ‘on’ and dressed for your majestic entrance into the club. Then there’s the change of wig and outfit for each performance. “I remember now why I took a break,” says Bianca after her first Mariah number. “Living in Hell’s Kitchen and schlepping around two suitcases of outfits to a show is exhausting. But it is nice to be back after such a long break.” Elmira, NY is where Bianca was born and has a surprisingly large and supportive community with a long drag history. “Everyone in drag has performed in Elmira. Lady Bunny, Bianca Del Rio, Katya … basically most of the contestants before or after Drag Race have made it up for a show and they are adored and supported by the community up here,” says Bianca. Even outside of New York, the drag scene is thriving, in small, out-of-the-way

bars and clubs where the queens are paid only in tips. Bianca has performed up and down the east coast, from Jacksonville, Florida, all the way up to Toronto, Canada. She really made her mark when she first moved to New York and became resident diva of MiX Lounge in Astoria, where she held a weekly show called Obsession Saturday for two years. Moving to Manhattan poses a challenge for every successful drag queen. First, they have to get that allimportant break into the scene; then they have to find an apartment that can house all the outfits, make up, shoes, and wigs. “You almost need a two-bedroom apartment to be a drag queen in New York City. One room for you to live and rest of the apartment for your shoes, outfits, wigs, make-up, and boxes and boxes of jewelry. It’s like living with two people,” says Bianca. But, like every artist, sometimes you need to take a rest, to recharge, and after maintaining a full-time job during the week and performing in drag every weekend for 13 years, there was a need for a holiday. “I just needed to step away from it for a while and come back to it with a real appreciation. Well, that and I met someone and we got married, so that took up a lot of my time,” says Bianca. There was the occasional call to come back and perform, but each one was turned down because it didn’t feel right. Then late last year resident drag queen of Elmira (and close personal friend), Miss Viola, approached Bianca and asked if she would like to make her return and perform at her annual All That Glitters Christmas show. How could any self-respecting queen refuse? Putting her wig back on, she made the trip and was welcomed back with open arms. “It was great seeing everyone, so many people that I’ve known for years came to watch. It was amazing being welcomed back on stage with many queens that I helped support over the years. It was touching. And I’m glad to be back. I have a couple of bookings and might even throw my wig into the ring and try out for Miss Gay Elmira 2016. Who knows what’s on the cards for 2016?” says a happy Bianca Mann. You can find Bianca on Facebook (Bianca Mann) and Twitter (@BiancaMann)

The free publication for the hottest neighborhood in New York City, Hell's Kitchen. Celebrating the people, the food and the property – pick...

The free publication for the hottest neighborhood in New York City, Hell's Kitchen. Celebrating the people, the food and the property – pick...