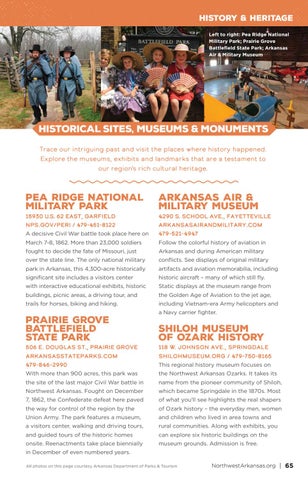 HISTORICAL SITES, MUSEUMS & MONUMENTS Trace our intriguing past and visit the places where history happened. Explore the museums, exhibits and landmarks that are a testament to our region’s rich cultural heritage.

fought to decide the fate of Missouri, just

Arkansas and during American military

over the state line. The only national military

park in Arkansas, this 4,300-acre historically

artifacts and aviation memorabilia, including

historic aircraft – many of which still fly.

Static displays at the museum range from

the Golden Age of Aviation to the jet age,

trails for horses, biking and hiking.

including Vietnam-era Army helicopters and

This regional history museum focuses on

With more than 900 acres, this park was

the Northwest Arkansas Ozarks. It takes its

the site of the last major Civil War battle in

name from the pioneer community of Shiloh,

which became Springdale in the 1870s. Most

of what you'll see highlights the real shapers

the way for control of the region by the

and children who lived in area towns and

rural communities. Along with exhibits, you

and guided tours of the historic homes

can explore six historic buildings on the

in December of even numbered years. All photos on this page courtesy Arkansas Department of Parks & Tourism 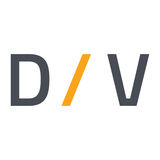