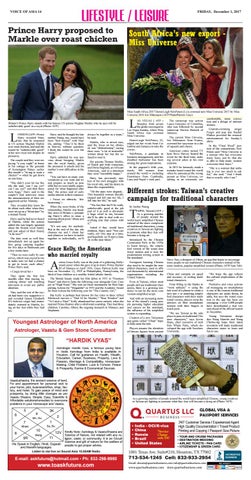 Britain’s Prince Harry stands with his fiancée US actress Meghan Markle who he says will be unbelievably good’ as a royal (Photo: AFP)

ONDON | AFP - Prince Harry revealed Monday that he proposed to US actress Meghan Markle over roast chicken, and said she would be “unbelievably good” at her new royal role despite its pressures. The couple said they were enjoying “a cosy night” at home in his cottage in the grounds of Kensington Palace earlier this month -- “trying to roast a chicken” -- when he got down on one knee. “She didn’t even let me finish, she said, ‘can I say yes? can I say yes?’ and then there were hugs,” Harry said in the couple’s first interview since the announcement of their engagement earlier Monday. They revealed they knew little about each other when they were set up on a “blind date” by a mutual friend. Harry said he had never heard of Markle, while the actress added she was largely ignorant about the British royal family and just asked of their friend, “is he nice?” The date went so well they immediately met up again before going camping together for five days in Botswana just a few weeks later. “Then we were really by ourselves, which was crucial to me to make sure we had a chance to get to know each other,” Prince Harry said. - Corgis loved her They spent the first few months after that staying in, cooking dinner and watching television to avoid any public attention. They said the rest of the royals had been very supportive -and revealed Queen Elizabeth II’s beloved corgis had immediately warmed to Markle, lying on her feet while they had tea.

Harry said he thought his late mother Diana, too, would have been “best friends” with Markle, adding: “They’d be thick as thieves, without question. I think she would be over the moon.” Harry admitted he was nervous about bringing Markle into the royal family, given the pressures it entails and his mother’s own difficulties in the role. “You can have as many conversations as you want and try and prepare as much as possible but we were totally unprepared for what happened after that,” the prince said of early media interest in their romance. - Focus on ethnicity ‘disheartening’ -

always be together as a team,” he said. Markle, who is mixed race, said the focus on her ethnicity was “disheartening”, saying there were “a lot of mistruths” written about her but she refused to read it. Her parents Thomas Markle, of Dutch and Irish extraction, and Doria Ragland, an AfricanAmerican, said in a statement they were “incredibly happy.” Harry has previously spoken of his own struggles with his royal role, and his desire to share the responsibility. “All the stars were aligned... This beautiful woman literally tripped and fell into my life, I fell into her life,” he said.

When the news broke of the relationship, Markle was headline news in Britain -- prompting Harry’s office to issue a warning about press “abuse and harassment”.

“The fact that she’ll be really unbelievably good at the job part of it as well is obviously a huge relief to me, because she’ll be able to deal with everything else that comes with it.”

“It’s not easy for anybody. But at the end of the day she chooses me and I chose her and whatever we have to tackle together or individually, we’ll

Asked if they would have children, Harry said: “Not currently, no! One step at a time, and hopefully we’ll start a family in the near future.”

ctress Grace Kelly was at the peak of a glittering Hollywood career when she gave it up to marry Prince Rainier III of Monaco in April 1956. Grace Patricia Kelly was born on November 12, 1929 in Philadelphia, Pennsylvania, the third of four children in a wealthy Irish-Catholic family. The blonde beauty made her film debut in 1951 in “Fourteen Hours” and shot to fame the following year alongside Gary Cooper in “High Noon.” She won an Oscar nomination for Best Supporting Actress for “Mogambo” in 1953 and the Academy Award for Best Actress the following year for “The Country Girl.” But Kelly is perhaps best known for her roles in three Alfred Hitchcock movies -- “Dial M for Murder,” “Rear Window” and “To Catch a Thief.” Kelly abandoned her career entirely when she married Prince Rainier after a whirlwind courtship. They had three children: Caroline; Albert, the reigning monarch in Monaco; and Stephanie.

Miss South Africa 2017 Demi-Leigh Nel-Peters (L) is crowned new Miss Universe 2017 by Miss Universe 2016 Iris Mittenaere (AFP Photo/Patrick Gray) comfortable, tense correcAS VEGAS | AFP The runner-up was actress tion and a deluge of internet Beauties from across Laura Gonzalez of Colombia, memes. the globe converged in who was followed by second Grammy-winning singer Las Vegas Sunday, where Miss runner-up Davina Bennett of Fergie and pop star Rachel South Africa was crowned Jamaica. Platten provided the musical Miss Universe. The current Miss Universe, entertainment for Sunday’s Demi-Leigh Nel-Peters, 22, Iris Mittenaere from France, show. edged out her rivals from Co- crowned her successor to a din In the “Final Word” porlombia and Jamaica to take the of squeals and cheers. tion of the competition, Nelcrown. American comic turned TV Peters said “Miss Universe is Nel-Peters, a graduate in host Steve Harvey hosted the a woman who has overcome business management, said her event for the third time, mak- many fears, and by that she disabled half-sister has been ing several jokes at his own is able to help many women among her great inspirations. expense. overcome their fears.” In the pageant’s 66th year, In 2015 he famously made a “She is a woman that nothnearly 100 women from mistake heard round the world ing is ever too much to ask around the world -- including when he announced the wrong for,” she said. “And I think first-timers from Cambodia, person as Miss Universe, re- that is exactly who I am.” Laos and Nepal -- took part. sulting in an extremely un-

AIPEI, Taiwan | AFP As a growing number of people around the world learn simplified Chinese instead of the more complicated traditional characters, young creatives in Taiwan are fighting to promote what they fear will become a dying art. Introduced by the Chinese Communist Party in the 1950s to boost literacy, the simplified version of the script uses fewer strokes and is now the predominant writing system in the mainland. Foreigners learning Chinese also tend to be taught the simplified characters, used in official documents by international organisations including the United Nations. Even in Taiwan, where most people still use traditional characters, there is a growing tendency to opt for the more convenient simplified script. And with an increasing number of the island’s young people pursuing higher education and careers on the mainland, the influence of the simplified system is expanding.

Players assume the identities of literary figures from ancient

Steve Tsai, a designer of Zihun, an app that hopes to encourage more people to use traditional Chinese characters instead of the more modern, popular simplified version (Photo: AFP/ Sam Yeh) China and compete on speed and accuracy in writing traditional characters.

“We hope the app reflects the cultural implications of the script.”

From filling in the blanks to “word solitaire” -- using the last word of a phrase to create a new one -- or matching simplified characters with their traditional version, players write the answers on their smartphone screens with their fingers or touch pens.

Predictive and voice activated messaging on smartphones is one of the reasons traditional characters are under threat, he adds, but says the initial reaction to the app has been encouraging -- over 5,000 people have downloaded a trial version ahead of the official launch in December.

“We see Taiwan as the sole place to pass on traditional Chinese characters,” says Kevin Ruan, chief executive of tech firm Whale Party, which developed the app with Soochow University.

Vaastushastra, the ancient science of land. Fix and appointment for personal visit to your home, plot, business/office, shop, factory, and hotel. To gain peace of mind and prosperity, by doing little changes as per Vaastu Shastra. Simple, Easy, Scientific &amp; Affordable solutions/remedies to overcome problems in your Horoscope and Vaastu.

As a growing number of people around the world learn simplified Chinese, young creatives in Taiwan are fighting to promote what they fear will become a dying art (Photo: AFP)

Science of Nature, not related with any religion, caste, or community. It is an Occult Science and gift of nature for the welfare of people to get proper advice.

We Speak in English, Hindi, Gujarati and Marathi languages. Listen to me live on Sound Asia 10.50AM Radio

Voice of Asia Newspaper is based in Houston since 1987. We reach South Asian and Asian American families in Houston and surrounding cities in Texas. We print 10,000 copies weekly and reach families in 200 neighborhoods across five counties: Fort Bend, Harris, Brazoria, Galveston and Montgomery. We are audited by www.cvcaudit.com Keywords: Voice of Asia. Visit us online: www.voiceofasiaonline.com for the latest in Community News in Houston, upcoming events and Job Classifieds. Sign up for our weekly newsletter for news on community events and business opportunities. To reach us - to subscribe to our weekly newspaper, newsletter or showcase your business, call us at: 713-774-5140. To add your name to our weekly newsletter, email us at: ads@voiceofasiagroup.com 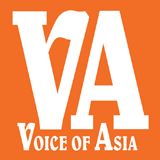