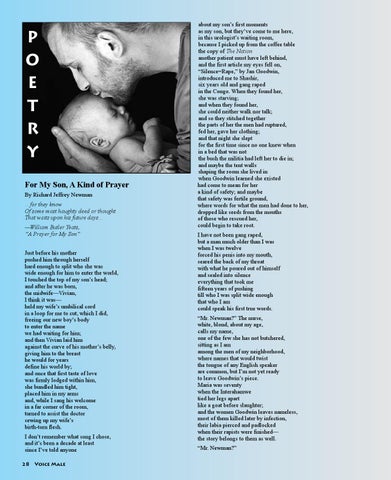 about my sonâ&#x20AC;&#x2122;s first moments as my son, but theyâ&#x20AC;&#x2122;ve come to me here, in this urologistâ&#x20AC;&#x2122;s waiting room, because I picked up from the coffee table the copy of The Nation another patient must have left behind, and the first article my eyes fell on, Âł6LOHQFH 5DSHÂ´E\-DQ*RRGZLQ introduced me to Shashir, six years old and gang raped in the Congo. When they found her, she was starving; and when they found her, she could neither walk nor talk; and so they stitched together the parts of her the men had ruptured, fed her, gave her clothing; and that night she slept for the first time since no one knew when in a bed that was not the bush the militia had left her to die in; and maybe the tent walls shaping the room she lived in ZKHQ*RRGZLQOHDUQHGVKHH[LVWHG had come to mean for her a kind of safety; and maybe that safety was fertile ground, where words for what the men had done to her, dropped like seeds from the mouths of those who rescued her, could begin to take root. I have not been gang raped, but a man much older than I was when I was twelve forced his penis into my mouth, seared the back of my throat with what he poured out of himself and sealed into silence everything that took me fifteen years of pushing till who I was split wide enough that who I am could speak his first true words. â&#x20AC;&#x153;Mr. Newman?â&#x20AC;? The nurse, white, blond, about my age, calls my name, one of the few she has not butchered, sitting as I am among the men of my neighborhood, where names that would twist the tongue of any English speaker are common, but Iâ&#x20AC;&#x2122;m not yet ready WROHDYH*RRGZLQÂśVSLHFH Maria was seventy when the Interahamwe tied her legs apart like a goat before slaughter; DQGWKHZRPHQ*RRGZLQOHDYHVQDPHOHVV most of them killed later by infection, their labia pierced and padlocked when their rapists were finishedâ&#x20AC;&#x201D; the story belongs to them as well. â&#x20AC;&#x153;Mr. Newman?â&#x20AC;? 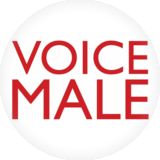