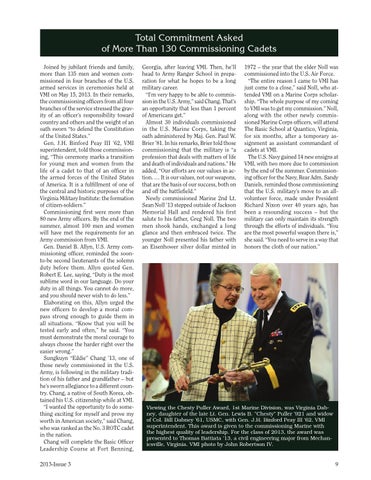 Total Commitment Asked of More Than 130 Commissioning Cadets Joined by jubilant friends and family, more than 135 men and women commissioned in four branches of the U.S. armed services in ceremonies held at VMI on May 15, 2013. In their remarks, the commissioning officers from all four branches of the service stressed the gravity of an officer’s responsibility toward country and others and the weight of an oath sworn “to defend the Constitution of the United States.” Gen. J.H. Binford Peay III ’62, VMI superintendent, told those commissioning, “This ceremony marks a transition for young men and women from the life of a cadet to that of an officer in the armed forces of the United States of America. It is a fulfillment of one of the central and historic purposes of the Virginia Military Institute: the formation of citizen-soldiers.” Commissioning first were more than 80 new Army officers. By the end of the summer, almost 100 men and women will have met the requirements for an Army commission from VMI. Gen. Daniel B. Allyn, U.S. Army commissioning officer, reminded the soonto-be second lieutenants of the solemn duty before them. Allyn quoted Gen. Robert E. Lee, saying, “Duty is the most sublime word in our language. Do your duty in all things. You cannot do more, and you should never wish to do less.” Elaborating on this, Allyn urged the new officers to develop a moral compass strong enough to guide them in all situations. “Know that you will be tested early and often,” he said. “You must demonstrate the moral courage to always choose the harder right over the easier wrong.” Sungkuyn “Eddie” Chang ’13, one of those newly commissioned in the U.S. Army, is following in the military tradition of his father and grandfather – but he’s sworn allegiance to a different country. Chang, a native of South Korea, obtained his U.S. citizenship while at VMI. “I wanted the opportunity to do something exciting for myself and prove my worth in American society,” said Chang, who was ranked as the No. 3 ROTC cadet in the nation. Chang will complete the Basic Officer Leadership Course at Fort Benning, 2013-Issue 3

Georgia, after leaving VMI. Then, he’ll head to Army Ranger School in preparation for what he hopes to be a long military career. “I’m very happy to be able to commission in the U.S. Army,” said Chang. That’s an opportunity that less than 1 percent of Americans get.” Almost 30 individuals commissioned in the U.S. Marine Corps, taking the oath administered by Maj. Gen. Paul W. Brier ’81. In his remarks, Brier told those commissioning that the military is “a profession that deals with matters of life and death of individuals and nations.” He added, “Our efforts are our values in action. … It is our values, not our weapons, that are the basis of our success, both on and off the battlefield.” Newly commissioned Marine 2nd Lt. Sean Noll ’13 stepped outside of Jackson Memorial Hall and rendered his first salute to his father, Greg Noll. The two men shook hands, exchanged a long glance and then embraced twice. The younger Noll presented his father with an Eisenhower silver dollar minted in

1972 – the year that the elder Noll was commissioned into the U.S. Air Force. “The entire reason I came to VMI has just come to a close,” said Noll, who attended VMI on a Marine Corps scholarship. “The whole purpose of my coming to VMI was to get my commission.” Noll, along with the other newly commissioned Marine Corps officers, will attend The Basic School at Quantico, Virginia, for six months, after a temporary assignment as assistant commandant of cadets at VMI. The U.S. Navy gained 14 new ensigns at VMI, with two more due to commission by the end of the summer. Commissioning officer for the Navy, Rear Adm. Sandy Daniels, reminded those commissioning that the U.S. military’s move to an allvolunteer force, made under President Richard Nixon over 40 years ago, has been a resounding success – but the military can only maintain its strength through the efforts of individuals. “You are the most powerful weapon there is,” she said. “You need to serve in a way that honors the cloth of our nation.”

Viewing the Chesty Puller Award, 1st Marine Division, was Virginia Dabney, daughter of the late Lt. Gen. Lewis B. “Chesty” Puller ’921 and widow of Col. Bill Dabney ’61, USMC, with Gen. J.H. Binford Peay III ’62, VMI superintendent. This award is given to the commissioning Marine with the highest quality of leadership. For the class of 2013, the award was presented to Thomas Battiata ’13, a civil engineering major from Mechanicsville, Virginia. VMI photo by John Robertson IV.

A quarterly publication of the Alumni Review.