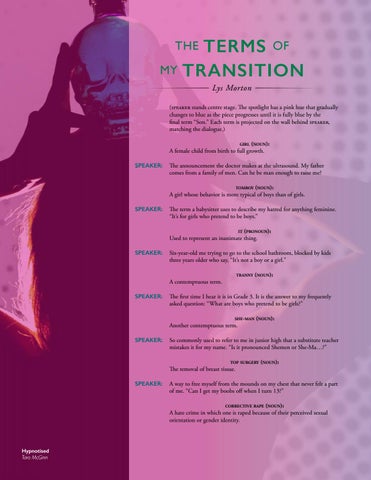 The Only Moll For Miles

Lys Morton (speaker stands centre stage. The spotlight has a pink hue that gradually changes to blue as the piece progresses until it is fully blue by the final term “Son.” Each term is projected on the wall behind speaker, matching the dialogue.) GIRL (NOUN): A female child from birth to full growth.

The announcement the doctor makes at the ultrasound. My father comes from a family of men. Can he be man enough to raise me? TOMBOY (NOUN): A girl whose behavior is more typical of boys than of girls.

The term a babysitter uses to describe my hatred for anything feminine. “It’s for girls who pretend to be boys.” IT (PRONOUN): Used to represent an inanimate thing.

Six-year-old me trying to go to the school bathroom, blocked by kids three years older who say, “It’s not a boy or a girl.” TRANNY (NOUN):

The first time I hear it is in Grade 3. It is the answer to my frequently asked question: “What are boys who pretend to be girls?” SHE-MAN (NOUN):

So commonly used to refer to me in junior high that a substitute teacher mistakes it for my name. “Is it pronounced Shemen or She-Ma…?” TOP SURGERY (NOUN):

The removal of breast tissue. SPEAKER:

A way to free myself from the mounds on my chest that never felt a part of me. “Can I get my boobs off when I turn 13?” CORRECTIVE RAPE (NOUN): A hate crime in which one is raped because of their perceived sexual orientation or gender identity. 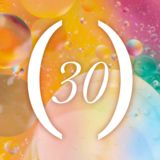