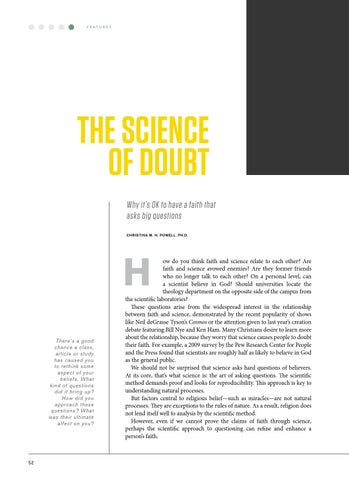 THE SCIENCE OF DOUBT Why it’s OK to have a faith that asks big questions CHRISTINA M. H. POWELL, PH.D.

H There’s a good chance a class, article or study has caused you to rethink some aspect of your beliefs. What kind of questions did it bring up? How did you approach these questions? What was their ultimate affect on you?

ow do you think faith and science relate to each other? Are faith and science avowed enemies? Are they former friends who no longer talk to each other? On a personal level, can a scientist believe in God? Should universities locate the theology department on the opposite side of the campus from the scientific laboratories? These questions arise from the widespread interest in the relationship between faith and science, demonstrated by the recent popularity of shows like Neil deGrasse Tyson’s Cosmos or the attention given to last year’s creation debate featuring Bill Nye and Ken Ham. Many Christians desire to learn more about the relationship, because they worry that science causes people to doubt their faith. For example, a 2009 survey by the Pew Research Center for People and the Press found that scientists are roughly half as likely to believe in God as the general public. We should not be surprised that science asks hard questions of believers. At its core, that’s what science is: the art of asking questions. The scientific method demands proof and looks for reproducibility. This approach is key to understanding natural processes. But factors central to religious belief—such as miracles—are not natural processes. They are exceptions to the rules of nature. As a result, religion does not lend itself well to analysis by the scientific method. However, even if we cannot prove the claims of faith through science, perhaps the scientific approach to questioning can refine and enhance a person’s faith. Through content marked by creativity and integrity, Vital’s mission is to provide a Christ-centered, Spirit-empowered perspective that prope...

Through content marked by creativity and integrity, Vital’s mission is to provide a Christ-centered, Spirit-empowered perspective that prope...