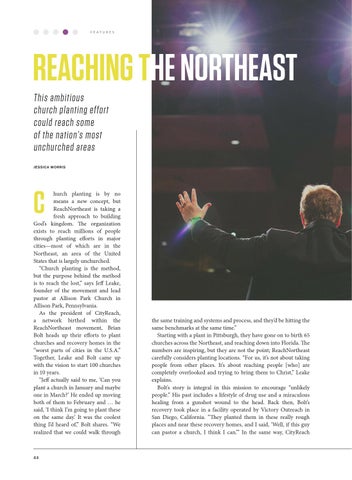 hurch planting is by no means a new concept, but ReachNortheast is taking a fresh approach to building God’s kingdom. The organization exists to reach millions of people through planting efforts in major cities—most of which are in the Northeast, an area of the United States that is largely unchurched. “Church planting is the method, but the purpose behind the method is to reach the lost,” says Jeff Leake, founder of the movement and lead pastor at Allison Park Church in Allison Park, Pennsylvania. As the president of CityReach, a network birthed within the ReachNortheast movement, Brian Bolt heads up their efforts to plant churches and recovery homes in the “worst parts of cities in the U.S.A.” Together, Leake and Bolt came up with the vision to start 100 churches in 10 years. “Jeff actually said to me, ‘Can you plant a church in January and maybe one in March?’ He ended up moving both of them to February and … he said, ‘I think I’m going to plant these on the same day.’ It was the coolest thing I’d heard of,” Bolt shares. “We realized that we could walk through

the same training and systems and process, and they’d be hitting the same benchmarks at the same time.” Starting with a plant in Pittsburgh, they have gone on to birth 65 churches across the Northeast, and reaching down into Florida. The numbers are inspiring, but they are not the point; ReachNortheast carefully considers planting locations. “For us, it’s not about taking people from other places. It’s about reaching people [who] are completely overlooked and trying to bring them to Christ,” Leake explains. Bolt’s story is integral in this mission to encourage “unlikely people.” His past includes a lifestyle of drug use and a miraculous healing from a gunshot wound to the head. Back then, Bolt’s recovery took place in a facility operated by Victory Outreach in San Diego, California. “They planted them in these really rough places and near these recovery homes, and I said, ‘Well, if this guy can pastor a church, I think I can.’” In the same way, CityReach