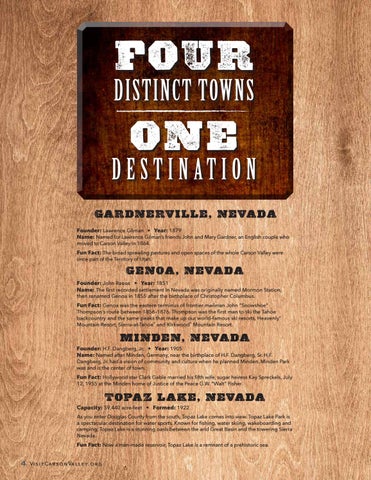 Fun Fact: The broad sprawling pastures and open spaces of the whole Carson Valley were once part of the Territory of Utah.

Founder: John Reese • Year: 1851 Name: The first recorded settlement in Nevada was originally named Mormon Station, then renamed Genoa in 1855 after the birthplace of Christopher Columbus.

Thompson’s route between 1856–1876. Thompson was the first man to ski the Tahoe backcountry and the same peaks that make up our world-famous ski resorts, Heavenly® Mountain Resort, Sierra-at-Tahoe® and Kirkwood® Mountain Resort.

Dangberg, Jr. had a vision of community and culture when he planned Minden. Minden Park was and is the center of town.

Capacity: 59,440 acre-feet • Formed: 1922 As you enter Douglas County from the south, Topaz Lake comes into view. Topaz Lake Park is a spectacular destination for water sports. Known for fishing, water skiing, wakeboarding and camping, Topaz Lake is a stunning oasis between the arid Great Basin and the towering Sierra Nevada.

Fun Fact: Now a man-made reservoir, Topaz Lake is a remnant of a prehistoric sea. 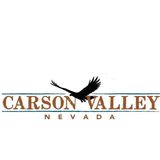