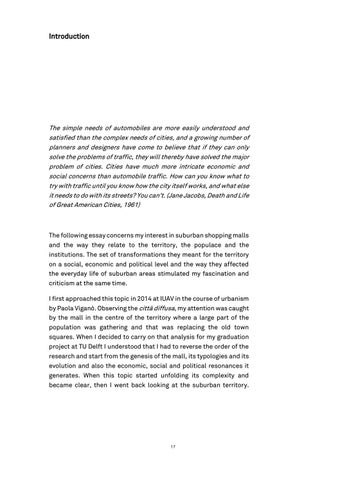 The simple needs of automobiles are more easily understood and satisfied than the complex needs of cities, and a growing number of planners and designers have come to believe that if they can only solve the problems of traffic, they will thereby have solved the major problem of cities. Cities have much more intricate economic and social concerns than automobile traffic. How can you know what to try with traffic until you know how the city itself works, and what else it needs to do with its streets? You canâ&amp;#x20AC;&amp;#x2122;t. (Jane Jacobs, Death and Life of Great American Cities, 1961)

The following essay concerns my interest in suburban shopping malls and the way they relate to the territory, the populace and the institutions. The set of transformations they meant for the territory on a social, economic and political level and the way they affected the everyday life of suburban areas stimulated my fascination and criticism at the same time. I first approached this topic in 2014 at IUAV in the course of urbanism by Paola ViganĂ˛. Observing the cittĂ diffusa, my attention was caught by the mall in the centre of the territory where a large part of the population was gathering and that was replacing the old town squares. When I decided to carry on that analysis for my graduation project at TU Delft I understood that I had to reverse the order of the research and start from the genesis of the mall, its typologies and its evolution and also the economic, social and political resonances it generates. When this topic started unfolding its complexity and became clear, then I went back looking at the suburban territory.

Suburban shopping centres are the main attractor, socially and commercially. Overcoming the scale of small town centres and providing a common regional place, these world interiors of capital are building a new territorial identity. Nevertheless, today online shopping is denaturating shopping centres, turning them into entertaining centres. The project deals with very different scales to envision a future scenario for the Western European dispersed city and to frame to future the role of the mall for these territories. The suburban commons proposes a mediation between the public, the private and the collective to imagine a new regional centre that breaks the sole commercial function and provides a place to gather, a space of appearance, linked to its territory. It imagines a sustainable, convivial scenario that rethinks the shopping centre and prepares the territory for a possible post-mall phase. 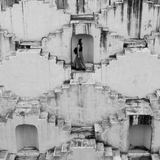