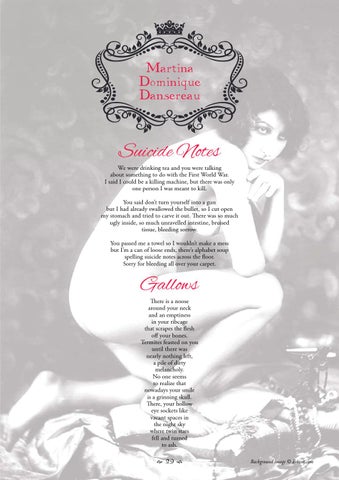 We were drinking tea and you were talking about something to do with the First World War. I said I could be a killing machine, but there was only one person I was meant to kill. You said don’t turn yourself into a gun but I had already swallowed the bullet, so I cut open my stomach and tried to carve it out. There was so much ugly inside, so much unravelled intestine, bruised tissue, bleeding sorrow. You passed me a towel so I wouldn’t make a mess but I’m a can of loose ends, there’s alphabet soup spelling suicide notes across the floor. Sorry for bleeding all over your carpet.

Gallows There is a noose around your neck and an emptiness in your ribcage that scrapes the flesh off your bones. Termites feasted on you until there was nearly nothing left, a pile of dirty melancholy. No one seems to realize that nowadays your smile is a grinning skull. There, your hollow eye sockets like vacant spaces in the night sky where twin stars fell and turned to ash. e 29 f 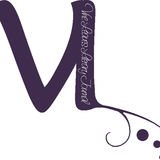