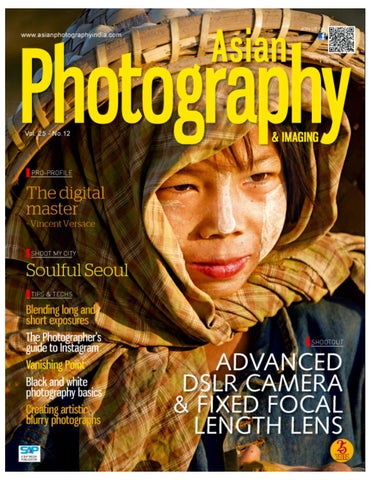 Hailed as the pioneer in the art and science of digital photography, American photographer Vincent Versace is recognised internationally for his work. He is one of the few photographers who are not just creative but also wellgrounded in the technical side of the art. He was recently in India, for a series of photography workshops organised by Tumbhi in Banaras and Mumbai. During his visit, we had a chance to catch up with the master, and learn the secrets behind his success.

The beginning Vincent Versace’s first tryst with photography was when he was barely six years old. His uncle Frank, a wedding photographer, when babysitting Vincent, made him take his first trip to the dark room to develop prints. And since that day, Vincent has been hooked. Soon he started saving up for his first camera, and when he was barely 9 years old, he had a picture published in a local newspaper for which he was paid $50. He took up photography in high school, and at 15, when he shot a picture of the waterfalls in the Smokey Mountains, he knew he wanted to be a photographer.

Vincent soon started assisting his uncle, who was a large-format photographer, and then at 17 he shot a wedding. “This was going to be a real paid assignment. I charged them $250, but ended up spending $285 on processing it. I was not a very good businessman,” he laughed. Soon after that, reading an ad in the newspaper, he took up a job to shoot portraits in a department store during the weekend. “I worked for three weeks, but I was told I just

didn’t have what it took to be a professional photographer. I was handed a card, and was told to “take up a career as a bus boy or do food service, but a career in arts is just not for you”,” he said. He stuck it out and soon was photographing Hollywood, shooting portfolios, actors’ headshots and publicity photographs. In 1998, Vincent went on to receive the prestigious Computerworld Smithsonian Award in Media Arts &amp; Entertainment, and

his work became a part of the permanent collection of the Smithsonian Institution’s Museum of American History. “Winning the Smithsonian was life changing. The award was for innovation, and it was based on the understanding that all great innovation, meets great resistance. It was basically for finding innovation and cataloguing it. I had come up with a unique idea in digital imaging and printing, which changed the way headshots were done in Hollywood,” he said.

Vincent said that winning the Smithsonian opened up a lot of doors for him. “Consecutively, I won the Shellenberg Award for fine arts. And it was amazing, because when I had won the Smithsonian, I was so broke that I had to sleep on a friend’s floor, not even the couch. The only way I could get to Washington to receive the award, was because I had wound up with a ticket, because I happened to have been bumped off by an airline. And overnight, it all changed.

Soon after that I was shooting digital images for Nikon, and also testing inkjet printers for EPSON,” he said, adding that at his peak for about 12-15 years, he was shooting 6000 rolls of film a year, of just nothing but black and white portraits, in addition to other fine arts stuff.

Guiding Light When asked about his preference towards natural or artificial lighting, Vincent used a quote from W. Eugene Smith to answer the question. “If you ask me what the best light is, I’ll say available light, and quoting Smith, “Available light is any damn light that is available”.

The Indian Experience When asked about his experience in India, he says that he was very happy with the response of budding photographer. He states that the enthusiasm shown by young Indian photographers to learn new things is astounding. “During my workshops I had an amazing time. The questions that I was asked were intelligent and well-thought out. The photographers were ready to learn, with no conditions attached, and the enthusiasm is quite refreshing,” he said. Vincent said that of all the places he has shot in the world, India is one of the visually richest and most spiritual experiences he has had. He says that he believes that with an environment so vibrant, there should be more photographers emerging out of India. “There is just so much here to capture, that you simply walk out of the door and there are unlimited opportunities to see and shoot. It’s the most photographyrich environment in the world, and that’s why we should see more world-class photographers emerging from this country,” he said.

However, I prefer sunlight, because I think it’s the prettiest light of all. My second choice is hot light, like LED or tungsten light, and my least favourite light would be strobe. There

is obviously an application for strobe, but the light is hard and it’s too psychic for me. Also, the barrier to entry with strobe light is thousands of dollars, whereas with natural light, you

just have to step outside. I’m not adverse to strobes, I do own and use strobe, but the kind of work I do today, I prefer natural light,” said Vincent. Talking about his current

work, Vincent said he simply shoots. “Today, I seem to be allowed to cross genres. I can shoot fashion, portraits, commercial, nature, photojournalism and so on. I believe if you are an artist or photographer, you should be able to master every form. Even if you don’t like it, you should be able to master it. Which is why when I started resisting artificial light, it became my new best friend. I worked with it, and I know how to use it.

personal level. Having just conducted a photo-workshop in a location like Banaras, which is quite colourful, seems to be a conflicting location for a black and white photographer. So when we asked Vincent if he shot Banaras in colour, he said he’d rather just shoot

Banaras. “I don’t think you take a photograph, a photograph takes you. The photographs that are meant to be colour will be colour, and same goes for black and white. There is no one or the other. There is a tendency to want to do that, but I enjoy the freedom to just say yes,” he said.

On Image Manipulation One of the letters we often get is questioning how ethical post-processing is. We decided to ask Vincent his take on the issue. “I think it’s a silly argument, because it’s basically a digital darkroom. When it’s overdone is the problem.

Didn’t you dodge and burn, use push and pull process in the dark room? All of that is analogue photoshop. So is the work of Jerry Uelsmann, one of the greatest photographers of our time who used multiple negatives and dozen enlargers, not valid? My job is to create a vision of my moment. The best photograph is which you saw through the pentaprism, and it will never look the exact same in picture. Whether the print you see is one layer or thirtyseven, if you like it, then the job is done,” he said.

Then and Now Vincent is one of the photographers who shot in the era of film, and then translated to digital. He said he was always waiting for digital to be invented. We asked him if the art of photography is undervalued with digital photography going to smartphones. “I love where we are today; the drawback is we sometimes give in to goodenough. I don’t think the art is being undervalued, but the bar

of exceptional has lowered for many. I think people find more artistic value in photography, than they ever did, as it is now more accessible. In the days of film, you had a picture of the communion, high school, the prom etc. Today, people have 300 pictures of their lunch,” he laughed. Vincent also added that the competition has become fiercer now. “Back in the day, you could just float. But today that’s not possible. With digital, you cannot get lazy, and if you don’t like change, you’re going to like your relevancy even less. Today, you have to constantly evolve, and that’s a good thing,” he said.

For the budding photographer We asked Vincent to give some advice to upcoming and budding photographers, and one of his first advices was having tenacity. “Be tenacious. Even if other people tell you that it’s not good, if you think it’s good, keep going; that’s

your voice. Another advice would be, just shoot. There was a time in my life, when I wanted to quit, but Nancy Carr, VP of Kodak, told me that I cannot and this is what I have to keep doing. I kept shooting, and that’s what has got me here today. Also remember, the currency of a photographer is a photograph. Photographers, who don’t shoot, are not photographers. You need to take that camera and shoot every day. Involve in a photographic process, whether capturing or manipulating, work on an image every day,” he concluded. -TEXT: Abhishek Desai