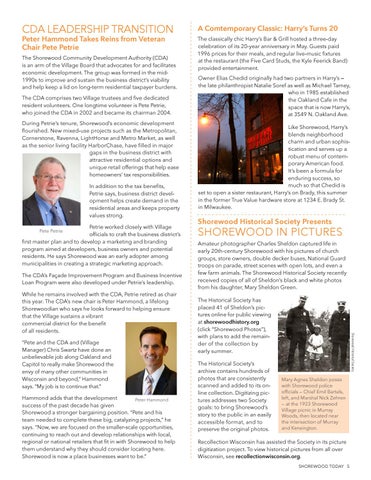 The Shorewood Community Development Authority (CDA) is an arm of the Village Board that advocates for and facilitates economic development. The group was formed in the mid1990s to improve and sustain the business district’s viability and help keep a lid on long-term residential taxpayer burdens. The CDA comprises two Village trustees and five dedicated resident volunteers. One longtime volunteer is Pete Petrie, who joined the CDA in 2002 and became its chairman 2004. During Petrie’s tenure, Shorewood’s economic development flourished. New mixed-use projects such as the Metropolitan, Cornerstone, Ravenna, LightHorse and Metro Market, as well as the senior living facility HarborChase, have filled in major gaps in the business district with attractive residential options and unique retail offerings that help ease homeowners’ tax responsibilities. In addition to the tax benefits, Petrie says, business district development helps create demand in the residential areas and keeps property values strong. Petrie worked closely with Village Pete Petrie officials to craft the business district’s first master plan and to develop a marketing and branding program aimed at developers, business owners and potential residents. He says Shorewood was an early adopter among municipalities in creating a strategic marketing approach. The CDA’s Façade Improvement Program and Business Incentive Loan Program were also developed under Petrie’s leadership.

“Pete and the CDA and (Village Manager) Chris Swartz have done an unbelievable job along Oakland and Capitol to really make Shorewood the envy of many other communities in Wisconsin and beyond,” Hammond says. “My job is to continue that.” Hammond adds that the development Peter Hammond success of the past decade has given Shorewood a stronger bargaining position. “Pete and his team needed to complete these big, catalyzing projects,” he says. “Now, we are focused on the smaller-scale opportunities, continuing to reach out and develop relationships with local, regional or national retailers that fit in with Shorewood to help them understand why they should consider locating here. Shorewood is now a place businesses want to be.”

The classically chic Harry’s Bar &amp; Grill hosted a three-day celebration of its 20-year anniversary in May. Guests paid 1996 prices for their meals, and regular live-music fixtures at the restaurant (the Five Card Studs, the Kyle Feerick Band) provided entertainment. Owner Elias Chedid originally had two partners in Harry’s — the late philanthropist Natalie Soref as well as Michael Tarney, who in 1985 established the Oakland Cafe in the space that is now Harry’s, at 3549 N. Oakland Ave. Like Shorewood, Harry’s blends neighborhood charm and urban sophistication and serves up a robust menu of contemporary American food. It’s been a formula for enduring success, so much so that Chedid is set to open a sister restaurant, Harry’s on Brady, this summer in the former True Value hardware store at 1234 E. Brady St. in Milwaukee.

Amateur photographer Charles Sheldon captured life in early 20th-century Shorewood with his pictures of church groups, store owners, double decker buses, National Guard troops on parade, street scenes with open lots, and even a few farm animals. The Shorewood Historical Society recently received copies of all of Sheldon’s black and white photos from his daughter, Mary Sheldon Green. The Historical Society has placed 41 of Sheldon’s pictures online for public viewing at shorewoodhistory.org (click “Shorewood Photos”), with plans to add the remainder of the collection by early summer. The Historical Society’s archive contains hundreds of photos that are consistently scanned and added to its online collection. Digitizing pictures addresses two Society goals: to bring Shorewood’s story to the public in an easily accessible format, and to preserve the original photos.

While he remains involved with the CDA, Petrie retired as chair this year. The CDA’s new chair is Peter Hammond, a lifelong Shorewoodian who says he looks forward to helping ensure that the Village sustains a vibrant commercial district for the benefit of all residents.

Mary Agnes Sheldon poses with Shorewood police officials — Chief Emil Bartels, left, and Marshal Nick Zehren — at the 1923 Shorewood Village picnic in Murray Woods, then located near the intersection of Murray and Kensington.

Recollection Wisconsin has assisted the Society in its picture digitization project. To view historical pictures from all over Wisconsin, see recollectionwisconsin.org. SHOREWOOD TODAY 5