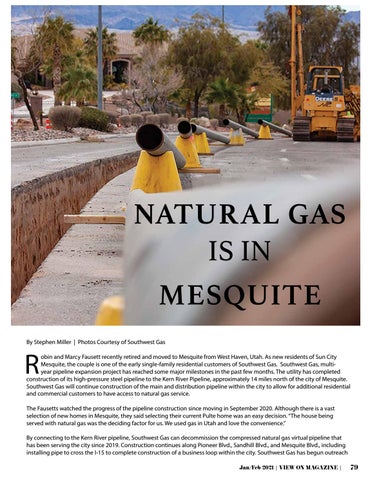 obin and Marcy Fausett recently retired and moved to Mesquite from West Haven, Utah. As new residents of Sun City Mesquite, the couple is one of the early single-family residential customers of Southwest Gas. Southwest Gas, multiyear pipeline expansion project has reached some major milestones in the past few months. The utility has completed construction of its high-pressure steel pipeline to the Kern River Pipeline, approximately 14 miles north of the city of Mesquite. Southwest Gas will continue construction of the main and distribution pipeline within the city to allow for additional residential and commercial customers to have access to natural gas service. The Fausetts watched the progress of the pipeline construction since moving in September 2020. Although there is a vast selection of new homes in Mesquite, they said selecting their current Pulte home was an easy decision. â&#x20AC;&#x153;The house being served with natural gas was the deciding factor for us. We used gas in Utah and love the convenience.â&#x20AC;? By connecting to the Kern River pipeline, Southwest Gas can decommission the compressed natural gas virtual pipeline that has been serving the city since 2019. Construction continues along Pioneer Blvd., Sandhill Blvd., and Mesquite Blvd., including installing pipe to cross the I-15 to complete construction of a business loop within the city. Southwest Gas has begun outreach