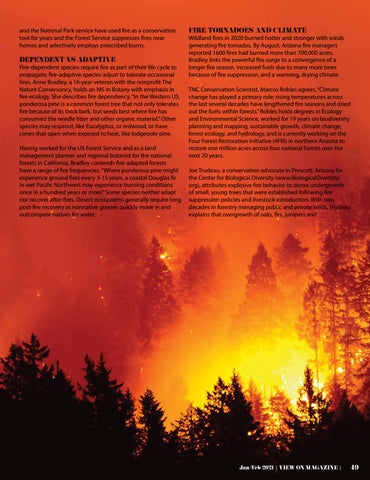 and the National Park service have used fire as a conservation tool for years and the Forest Service suppresses fires near homes and selectively employs prescribed burns. DEPENDENT VS ADAPTIVE Fire-dependent species require fire as part of their life cycle to propagate; fire-adaptive species adjust to tolerate occasional fires. Anne Bradley, a 16-year veteran with the nonprofit The Nature Conservancy, holds an MS in Botany with emphasis in fire ecology. She describes fire dependency, “In the Western US, ponderosa pine is a common forest tree that not only tolerates fire because of its thick bark, but seeds best where fire has consumed the needle litter and other organic material.” Other species may resprout, like Eucalyptus, or redwood, or have cones that open when exposed to heat, like lodgepole pine. Having worked for the US Forest Service and as a land management planner and regional botanist for the national forests in California, Bradley contends fire-adapted forests have a range of fire frequencies. “Where ponderosa pine might experience ground fires every 3-15 years, a coastal Douglas fir in wet Pacific Northwest may experience burning conditions once in a hundred years or more.” Some species neither adapt nor recover after fires. Desert ecosystems generally require long post-fire recovery as nonnative grasses quickly move in and outcompete natives for water.

FIRE TORNADOES AND CLIMATE Wildland fires in 2020 burned hotter and stronger with winds generating fire tornados. By August, Arizona fire managers reported 1600 fires had burned more than 700,000 acres. Bradley links the powerful fire surge to a convergence of a longer fire season, increased fuels due to many more trees because of fire suppression, and a warming, drying climate. TNC Conservation Scientist, Marcos Robles agrees, “Climate change has played a primary role; rising temperatures across the last several decades have lengthened fire seasons and dried out the fuels within forests.” Robles holds degrees in Ecology and Environmental Science, worked for 19 years on biodiversity planning and mapping, sustainable growth, climate change, forest ecology, and hydrology, and is currently working on the Four Forest Restoration Initiative (4FRI) in northern Arizona to restore one million acres across four national forests over the next 20 years. Joe Trudeau, a conservation advocate in Prescott, Arizona for the Center for Biological Diversity (www.BiologicalDiversity. org), attributes explosive fire behavior to dense undergrowth of small, young trees that were established following fire suppression policies and livestock introduction. With two decades in forestry managing public and private lands, Trudeau explains that overgrowth of oaks, firs, junipers and