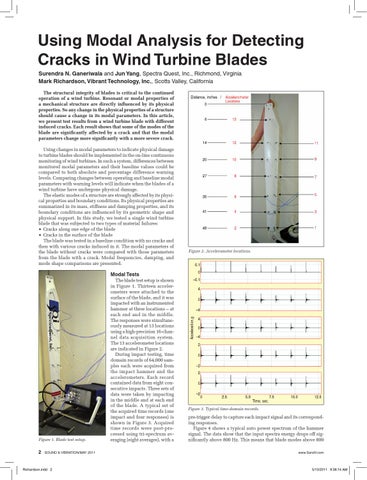 Using Modal Analysis for Detecting Cracks in Wind Turbine Blades Surendra N. Ganeriwala and Jun Yang, Spectra Quest, Inc., Richmond, Virginia Mark Richardson, Vibrant Technology, Inc., Scotts Valley, California The structural integrity of blades is critical to the continued operation of a wind turbine. Resonant or modal properties of a mechanical structure are directly influenced by its physical properties. So any change in the physical properties of a structure should cause a change in its modal parameters. In this article, we present test results from a wind turbine blade with different induced cracks. Each result shows that some of the modes of the blade are significantly affected by a crack and that the modal parameters change more significantly with a more severe crack. Using changes in modal parameters to indicate physical damage to turbine blades should be implemented in the on-line continuous monitoring of wind turbines. In such a system, differences between monitored modal parameters and their baseline values could be compared to both absolute and percentage difference warning levels. Comparing changes between operating and baseline modal parameters with warning levels will indicate when the blades of a wind turbine have undergone physical damage. The elastic modes of a structure are strongly affected by its physical properties and boundary conditions. Its physical properties are summarized in its mass, stiffness and damping properties, and its boundary conditions are influenced by its geometric shape and physical support. In this study, we tested a single wind turbine blade that was subjected to two types of material failures: • Cracks along one edge of the blade • Cracks in the surface of the blade The blade was tested in a baseline condition with no cracks and then with various cracks induced in it. The modal parameters of the blade without cracks were compared with those parameters from the blade with a crack. Modal frequencies, damping, and mode shape comparisons are presented.

The blade test setup is shown in Figure 1. Thirteen accelerometers were attached to the surface of the blade, and it was impacted with an instrumented hammer at three locations – at each end and in the middle. The responses were simultaneously measured at 13 locations using a high-precision 16-channel data acquisition system. The 13 accelerometer locations are indicated in Figure 2. During impact testing, time domain records of 64,000 samples each were acquired from the impact hammer and the accelerometers. Each record contained data from eight consecutive impacts. Three sets of data were taken by impacting in the middle and at each end of the blade. A typical set of the acquired time records (one impact and four responses) is shown in Figure 3. Acquired time records were post-processed using tri-spectrum averaging (eight averages), with a

pre-trigger delay to capture each impact signal and its corresponding responses. Figure 4 shows a typical auto power spectrum of the hammer signal. The data show that the input spectra energy drops off significantly above 800 Hz. This means that blade modes above 800 www.SandV.com

Hz were not excited during this test. A typical response auto power spectrum is shown in the Figure 5, which shows that multiple modes are excited in the frequency span (0 to 800 Hz). Frequency response functions (FRFs) were then calculated from the auto and cross spectra. A typical FRF is shown in Figure 6. Each FRF contained 4,000 samples of data over a frequency span of 0 to 2563.5 Hz with a frequency resolution of 0.64 Hz. The results are only shown over a frequency span of 0 to 800 Hz. Modal parameters (frequency, damping, mode shape) were obtained by curve fitting each set of 13 FRFs. A red curve fit function is shown overlaid on the FRF data in Figure 6. www.SandV.com

The modal frequencies obtained from the four edge-crack tests are plotted in Figure 9. As expected, the frequencies trend downward with increased severity of the crack. This is because the edge cracks caused

a decrease in the blade stiffness. Modal damping for the four edge-crack cases is shown in Figure 10. Most of the damping changes from the baseline are negative, except for Modes 2 and 3, which are positive. A negative change means that the crack created less damping in the mode. A positive change means that the mode was more heavily damped than the baseline. Mode shape MAC (modal assurance criterion)3 values are commonly used to numerically compare two mode shapes. The MAC values for the four edge crack tests are shown in Figure 11. A MAC value of 100% indicates no change in the mode shape. The MAC values indicate little significant change due to the 5-inch crack, except for Mode 3. However, the 10-inch and 20-inch cracks caused significant changes in the mode shapes of several – but not all – modes. The modal frequencies obtained from the four surface crack tests are plotted in Figure 12. Most of the frequencies trend downward with increased crack severity. This is expected because the crack causes a decrease in the blade stiffness, resulting in lower frequencies with increasing crack severity. One exception was noted for Mode 4, which trended upward for the 2.6-inch crack. This upward trend was not expected. Modal damping for the four surface-crack cases is shown in Figure 13. The data indicate no significant change in the damping of the first two modes from the baseline, while the damping of all higher modes decreased. This is indicated by the negative from the baseline, meaning that the surface cracks created less damping in the blade. The result is somewhat surprising and should be investigated further. Mode shape MAC values for the four surface-crack tests are shown in Figure 14. All MAC values are above 98.4%. This means that all three surface cracks caused an insignificant change in the mode shapes. The first eight mode shapes are shown in Figure 15. Because only 13 responses were acquired, the spatial resolution is at a minimum. Nevertheless, bending and torsional modes were clearly excited in the span (0 to 600 Hz). SOUND &amp; VIBRATION/MAY 2011

Eight different modal tests were performed on one of the blades of a wind turbine maintenance trainer and simulator. The blade was approximately 4 feet long and was made out of fiberglass. Two types of cracks were induced into the blade â&amp;#x20AC;&amp;#x201C; edge cracks and surface cracks. The purpose of the tests was to determine whether or not significant changes in the modal parameters of the blade would indicate the presence of a crack. Thirteen accelerometers where mounted on the blade to obtain a minimum, though adequate, spatial sampling of its mode shapes. The blade was impacted with an instrumented hammer at its ends and its center. A total of eight different three-reference modal tests were performed on the blade. The acquired data were postprocessed, and 13 FRFs were calculated for each reference and each test case. Modal parameters (frequency, damping and mode www.SandV.com

of the test cases. • Mode shapes were significantly changed by the edge cracks but changed by less than 2% due to the surface cracks. In conclusion, these tests showed that monitoring changes in the modal frequency of the first seven modes may be sufficient to indicate faults in wind turbine blades. Of course, each blade would have to be monitored separately in a wind turbine monitoring system to detect its faults. Moreover, output only cross-spectrum measurements would be required instead of FRFs for curve fitting. The results of this investigation are encouraging but suggest a need for further study and experimentation to develop a complete methodology.

The structural integrity of blades is critical to the continued operation of a wind turbine. Resonant or modal properties of a mechanical structure are directly influenced by its physical properties. So any change in the physical properties of a structure should cause a change in its modal parameters. In this article, we present test results from a wind turbine blade with different induced cracks. Each result shows that some of the modes of the blade are significantly affected by a crack and that the modal parameters change more significantly with a more severe crack. 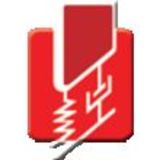