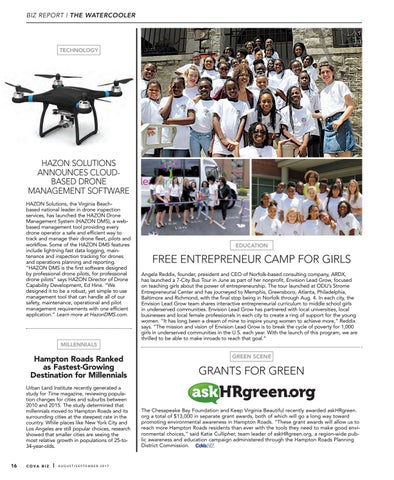 HAZON Solutions Announces CloudBased Drone Management Software HAZON Solutions, the Virginia Beachbased national leader in drone inspection services, has launched the HAZON Drone Management System (HAZON DMS), a webbased management tool providing every drone operator a safe and efficient way to track and manage their drone fleet, pilots and workflow. Some of the HAZON DMS features include lightning fast data logging, maintenance and inspection tracking for drones and operations planning and reporting. “HAZON DMS is the first software designed by professional drone pilots, for professional drone pilots” says HAZON Director of Drone Capability Development, Ed Hine. “We designed it to be a robust, yet simple to use management tool that can handle all of our safety, maintenance, operational and pilot management requirements with one efficient application.” Learn more at HazonDMS.com.

Free Entrepreneur Camp for Girls Angela Reddix, founder, president and CEO of Norfolk-based consulting company, ARDX, has launched a 7-City Bus Tour in June as part of her nonprofit, Envision Lead Grow, focused on teaching girls about the power of entrepreneurship. The tour launched at ODU’s Strome Entrepreneurial Center and has journeyed to Memphis, Greensboro, Atlanta, Philadelphia, Baltimore and Richmond, with the final stop being in Norfolk through Aug. 4. In each city, the Envision Lead Grow team shares interactive entrepreneurial curriculum to middle school girls in underserved communities. Envision Lead Grow has partnered with local universities, local businesses and local female professionals in each city to create a ring of support for the young women. “It has long been a dream of mine to inspire young women to achieve more,” Reddix says. “The mission and vision of Envision Lead Grow is to break the cycle of poverty for 1,000 girls in underserved communities in the U.S. each year. With the launch of this program, we are thrilled to be able to make inroads to reach that goal.”

Urban Land Institute recently generated a study for Time magazine, reviewing population changes for cities and suburbs between 2010 and 2015. The study determined that millennials moved to Hampton Roads and its surrounding cities at the steepest rate in the country. While places like New York City and Los Angeles are still popular choices, research showed that smaller cities are seeing the most relative growth in populations of 25-to34-year-olds.

The Chesapeake Bay Foundation and Keep Virginia Beautiful recently awarded askHRgreen. org a total of $13,000 in separate grant awards, both of which will go a long way toward promoting environmental awareness in Hampton Roads. “These grant awards will allow us to reach more Hampton Roads residents than ever with the tools they need to make good environmental choices,” said Katie Cullipher, team leader of askHRgreen.org, a region-wide public awareness and education campaign administered through the Hampton Roads Planning District Commission. 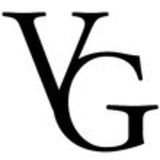