Visit from the stork final february 2014 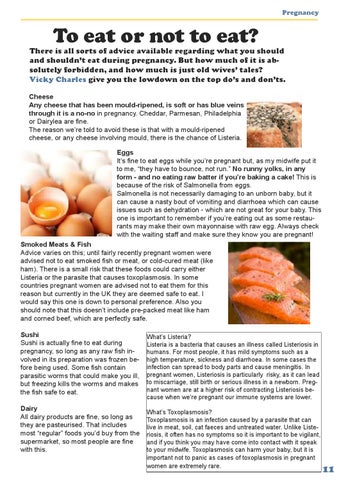 To eat or not to eat?

There is all sorts of advice available regarding what you should and shouldn’t eat during pregnancy. But how much of it is absolutely forbidden, and how much is just old wives’ tales? Vicky Charles give you the lowdown on the top do’s and don’ts. Cheese Any cheese that has been mould-ripened, is soft or has blue veins through it is a no-no in pregnancy. Cheddar, Parmesan, Philadelphia or Dairylea are fine. The reason we’re told to avoid these is that with a mould-ripened cheese, or any cheese involving mould, there is the chance of Listeria. Eggs It’s fine to eat eggs while you’re pregnant but, as my midwife put it to me, “they have to bounce, not run.” No runny yolks, in any form - and no eating raw batter if you’re baking a cake! This is because of the risk of Salmonella from eggs. Salmonella is not necessarily damaging to an unborn baby, but it can cause a nasty bout of vomiting and diarrhoea which can cause issues such as dehydration - which are not great for your baby. This one is important to remember if you’re eating out as some restaurants may make their own mayonnaise with raw egg. Always check with the waiting staff and make sure they know you are pregnant! Smoked Meats &amp; Fish Advice varies on this; until fairly recently pregnant women were advised not to eat smoked fish or meat, or cold-cured meat (like ham). There is a small risk that these foods could carry either Listeria or the parasite that causes toxoplasmosis. In some countries pregnant women are advised not to eat them for this reason but currently in the UK they are deemed safe to eat. I would say this one is down to personal preference. Also you should note that this doesn’t include pre-packed meat like ham and corned beef, which are perfectly safe. Sushi Sushi is actually fine to eat during pregnancy, so long as any raw fish involved in its preparation was frozen before being used. Some fish contain parasitic worms that could make you ill, but freezing kills the worms and makes the fish safe to eat. Dairy All dairy products are fine, so long as they are pasteurised. That includes most “regular” foods you’d buy from the supermarket, so most people are fine with this.

What’s Listeria? Listeria is a bacteria that causes an illness called Listeriosis in humans. For most people, it has mild symptoms such as a high temperature, sickness and diarrhoea. In some cases the infection can spread to body parts and cause meningitis. In pregnant women, Listeriosis is particularly risky, as it can lead to miscarriage, still birth or serious illness in a newborn. Pregnant women are at a higher risk of contracting Listeriosis because when we’re pregnant our immune systems are lower. What’s Toxoplasmosis? Toxoplasmosis is an infection caused by a parasite that can live in meat, soil, cat faeces and untreated water. Unlike Listeriosis, it often has no symptoms so it is important to be vigilant, and if you think you may have come into contact with it speak to your midwife. Toxoplasmosis can harm your baby, but it is important not to panic as cases of toxoplasmosis in pregnant women are extremely rare.

Visit from the stork final february 2014

Visit from the Stork is the UK's only publication for parents and parents-to-be under 25, providing them with news, features, and advice from pregnancy to parenting. We also have a website www.visitfromthestork.co.uk to complement the magazine.