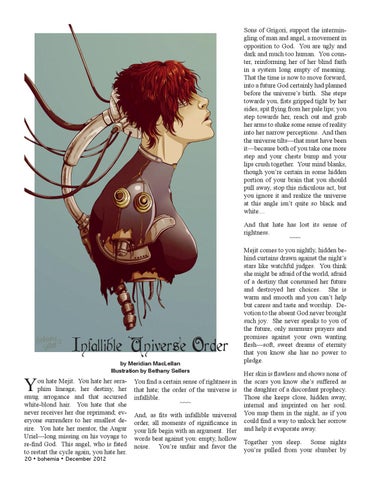 Sons of Grigori, support the intermingling of man and angel, a movement in opposition to God. You are ugly and dark and much too human. You counter, reinforming her of her blind faith in a system long empty of meaning. That the time is now to move forward, into a future God certainly had planned before the universe’s birth. She steps towards you, fists gripped tight by her sides, spit flying from her pale lips; you step towards her, reach out and grab her arms to shake some sense of reality into her narrow perceptions. And then the universe tilts—that must have been it—because both of you take one more step and your chests bump and your lips crush together. Your mind blanks, though you’re certain in some hidden portion of your brain that you should pull away, stop this ridiculous act, but you ignore it and realize the universe at this angle isn’t quite so black and white… And that hate has lost its sense of rightness. ~~~

ou hate Mejit. You hate her seraphim lineage, her destiny, her smug arrogance and that accursed white-blond hair. You hate that she never receives her due reprimand; everyone surrenders to her smallest desire. You hate her mentor, the Augur Uriel—long missing on his voyage to re-find God. This angel, who is fated to restart the cycle again, you hate her. 20 • bohemia • December 2012

You find a certain sense of rightness in that hate; the order of the universe is infallible. ~~~ And, as fits with infallible universal order, all moments of significance in your life begin with an argument. Her words beat against you: empty, hollow noise. You’re unfair and favor the

Mejit comes to you nightly, hidden behind curtains drawn against the night’s stars like watchful judges. You think she might be afraid of the world, afraid of a destiny that consumed her future and destroyed her choices. She is warm and smooth and you can’t help but caress and taste and worship. Devotion to the absent God never brought such joy. She never speaks to you of the future, only murmurs prayers and promises against your own wanting flesh—soft, sweet dreams of eternity that you know she has no power to pledge. Her skin is flawless and shows none of the scars you know she’s suffered as the daughter of a discordant prophecy. Those she keeps close, hidden away, internal and imprinted on her soul. You map them in the night, as if you could find a way to unlock her sorrow and help it evaporate away. Together you sleep. Some nights you’re pulled from your slumber by 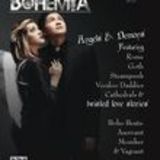