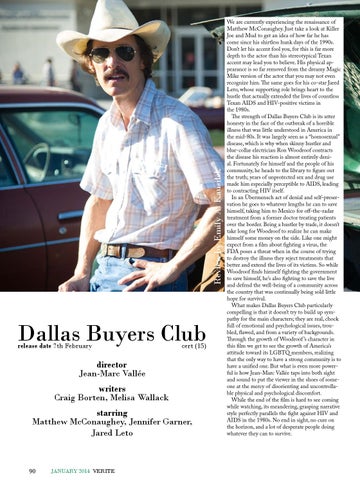 Review by Emily A. Kausilek

We are currently experiencing the renaissance of Matthew McConaughey. Just take a look at Killer Joe and Mud to get an idea of how far he has come since his shirtless hunk days of the 1990s. Don’t let his accent fool you, for this is far more depth to the actor than his stereotypical Texan accent may lead you to believe. His physical appearance is so far removed from the dreamy Magic Mike version of the actor that you may not even recognize him. The same goes for his co-star Jared Leto, whose supporting role brings heart to the hustle that actually extended the lives of countless Texan AIDS and HIV-positive victims in the 1980s. The strength of Dallas Buyers Club is its utter honesty in the face of the outbreak of a horrible illness that was little understood in America in the mid-80s. It was largely seen as a “homosexual” disease, which is why when skinny hustler and blue-collar electrician Ron Woodroof contracts the disease his reaction is almost entirely denial. Fortunately for himself and the people of his community, he heads to the library to figure out the truth; years of unprotected sex and drug use made him especially perceptible to AIDS, leading to contracting HIV itself. In an Übermensch act of denial and self-preservation he goes to whatever lengths he can to save himself, taking him to Mexico for off-the-radar treatment from a former doctor treating patients over the border. Being a hustler by trade, it doesn’t take long for Woodroof to realize he can make himself some money on the side. Like one might expect from a film about fighting a virus, the FDA poses a threat when in the course of trying to destroy the illness they reject treatments that better and extend the lives of its victims. So while Woodroof finds himself fighting the government to save himself, he’s also fighting to save the live and defend the well-being of a community across the country that was continually being sold little hope for survival. What makes Dallas Buyers Club particularly compelling is that it doesn’t try to build up sympathy for the main characters; they are real, chock full of emotional and psychological issues, troubled, flawed, and from a variety of backgrounds. Through the growth of Woodroof ’s character in this film we get to see the growth of America’s attitude toward its LGBTQ members, realizing that the only way to have a strong community is to have a unified one. But what is even more powerful is how Jean-Marc Vallée taps into both sight and sound to put the viewer in the shoes of someone at the mercy of disorienting and uncontrollable physical and psychological discomfort. While the end of the film is hard to see coming while watching, its meandering, grasping narrative style perfectly parallels the fight against HIV and AIDS in the 1980s. No end in sight, no cure on the horizon, and a lot of desperate people doing whatever they can to survive. 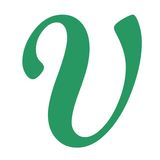 Vérité welcomes 2014 with a cracking new issue - discover if Scorsese's new film, The Wolf of Wall Street will fall inline with a trend spot...

Vérité welcomes 2014 with a cracking new issue - discover if Scorsese's new film, The Wolf of Wall Street will fall inline with a trend spot...