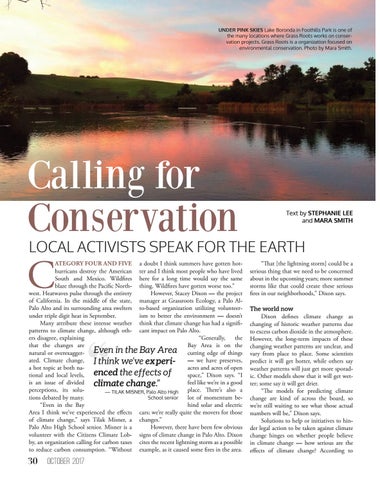 UNDER PINK SKIES Lake Boronda in Foothills Park is one of the many locations where Grass Roots works on conservation projects. Grass Roots is a organization focused on environmental conservation. Photo by Mara Smith.

LOCAL ACTIVISTS SPEAK FOR THE EARTH ATEGORY FOUR AND FIVE a doubt I think summers have gotten hothurricans destroy the American ter and I think most people who have lived South and Mexico. Wildfires here for a long time would say the same blaze through the Pacific North- thing. Wildfires have gotten worse too.” west. Heatwaves pulse through the entirety However, Stacey Dixon — the project of California. In the middle of the state, manager at Grassroots Ecology, a Palo AlPalo Alto and its surrounding area swelters to-based organization utilizing volunteerunder triple digit heat in September. ism to better the environment — doesn’t Many attribute these intense weather think that climate change has had a signifipatterns to climate change, although oth- cant impact on Palo Alto. ers disagree, explaining “Generally, the that the changes are Bay Area is on the natural or overexagger- Even in the Bay Area cutting edge of things ated. Climate change, I think we’ve experi- — we have preserves, a hot topic at both naacres and acres of open enced the effects of tional and local levels, space,” Dixon says. “I is an issue of divided climate change.” feel like we’re in a good perceptions, its soluplace. There’s also a — TILAK MISNER, Palo Alto High tions debated by many. lot of momentum beSchool senior “Even in the Bay hind solar and electric Area I think we’ve experienced the effects cars; we’re really quite the movers for those of climate change,” says Tilak Misner, a changes.” Palo Alto High School senior. Misner is a However, there have been few obvious volunteer with the Citizens Climate Lob- signs of climate change in Palo Alto. Dixon by, an organization calling for carbon taxes cites the recent lightning storm as a possible to reduce carbon consumption. “Without example, as it caused some fires in the area.

“That [the lightning storm] could be a serious thing that we need to be concerned about in the upcoming years; more summer storms like that could create these serious fires in our neighborhoods,” Dixon says. The world now Dixon defines climate change as changing of historic weather patterns due to excess carbon dioxide in the atmosphere. However, the long-term impacts of these changing weather patterns are unclear, and vary from place to place. Some scientists predict it will get hotter, while others say weather patterns will just get more sporadic. Other models show that it will get wetter; some say it will get drier. “The models for predicting climate change are kind of across the board, so we’re still waiting to see what those actual numbers will be,” Dixon says. Solutions to help or initiatives to hinder legal action to be taken against climate change hinges on whether people believe in climate change — how serious are the effects of climate change? According to

In this issue, we discuss how we define our beliefs and reflect on who we are as a community. Our story "Heritage of Hate" discusses the Charlottesville protest while the story "A City Rewinded" tell the story of the first murder-free year in East Palo Alto. 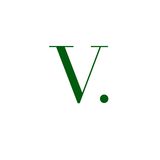