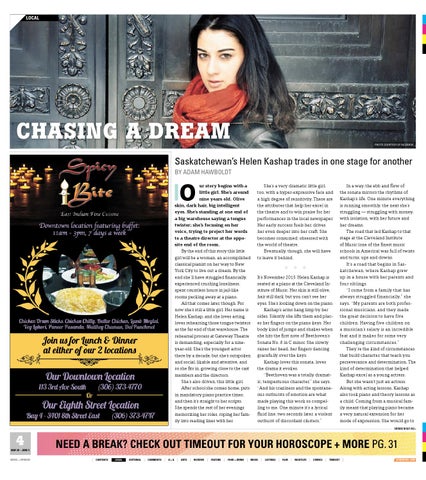 ur story begins with a little girl. She’s around nine years old. Olive skin, dark hair, big intelligent eyes. She’s standing at one end of a big warehouse saying a tongue twister; she’s focusing on her voice, trying to project her words to a theatre director at the opposite end of the room. By the end of this story this little girl will be a woman, an accomplished classical pianist on her way to New York City to live out a dream. By the end she’ll have struggled financially, experienced crushing loneliness, spent countless hours in jail-like rooms pecking away at a piano. All that comes later, though. For now she’s still a little girl. Her name is Helen Kashap, and she loves acting, loves rehearsing those tongue twisters as the far end of that warehouse. The rehearsal process at Gateway Theatre is demanding, especially for a nineyear-old. She’s the youngest actor there by a decade, but she’s outspoken and social, likable and attentive, and so she fits in, growing close to the cast members and the directors. She’s also driven, this little girl. After school she comes home, puts in mandatory piano practice times, and then it’s straight to her scripts. She spends the rest of her evenings memorizing her roles, roping her family into reading lines with her.

She’s a very dramatic little girl, too, with a hyper-expressive face and a high degree of sensitivity. These are the attributes that help her excel in the theatre and to win praise for her performances in the local newspaper. Her early success fuels her, drives her even deeper into her craft. She becomes consumed; obsessed with the world of theatre. Eventually, though, she will have to leave it behind.

It’s November 2013. Helen Kashap is seated at a piano at the Cleveland Institute of Music. Her skin is still olive, hair still dark, but you can’t see her eyes. She’s looking down on the piano. Kashap’s arms hang limp by her sides. Silently she lifts them and places her fingers on the piano keys. Her body kind of jumps and shakes when she hits the first note of Beethoven’s Sonata No. 8 in C minor. She slowly raises her head, her fingers dancing gracefully over the keys. Kashap loves this sonata, loves the drama it evokes. “Beethoven was a totally dramatic, tempestuous character,” she says. “And his craziness and the spontaneous outbursts of emotion are what made playing this work so compelling to me. One minute it’s a lyrical fluid line, two seconds later, a violent outburst of discordant clusters.”

In a way, the ebb and flow of the sonata mirrors the rhythms of Kashap’s life. One minute everything is running smoothly, the next she’s struggling — struggling with money, with isolation, with her future and her dreams. The road that led Kashap to that stage at the Cleveland Institute of Music (one of the finest music schools in America) was full of twists and turns, ups and downs. It’s a road that begins in Saskatchewan, where Kashap grew up in a house with her parents and four siblings. “I come from a family that has always struggled financially,” she says. “My parents are both professional musicians, and they made the great decision to have five children. Having five children on a musician’s salary is an incredible feat and it makes for some very challenging circumstances.” They’re the kind of circumstances that build character, that teach you perseverance and determination. The kind of determination that helped Kashap excel as a young actress. But she wasn’t just an actress. Along with acting lessons, Kashap also took piano and theory lessons as a child. Coming from a musical family meant that playing piano became a very natural extension for her mode of expression. She would go to Continued on next page »